Estimates are by definition uncertain and CPB estimates have regularly underestimated or overestimated the economy. In CEP and MEV it is regularly emphasized that the outcomes are uncertain and this is also the message of the scenarios that are presented. The fan charts provide a quantitative interpretation of the estimation uncertainty.

The high growth rate of the Dutch economy is over. For both this year and the next, GDP growth is projected at 1.5%, following years of growth percentages of over 2%. International trade is increasing at a slower rate, which is reflected by Dutch exports that are projected to grow substantially less rapidly in 2019 and 2020, compared to previous years. International uncertainties, such as US trade policy, Brexit and the state of the Chinese economy, have a negative impact on the economy. The budget also is projected to contribute by less than initially planned. Despite the lower growth levels, unemployment will stay low, purchasing power will increase and government finance remains under control. →

The high growth rate of the Dutch economy is over. → 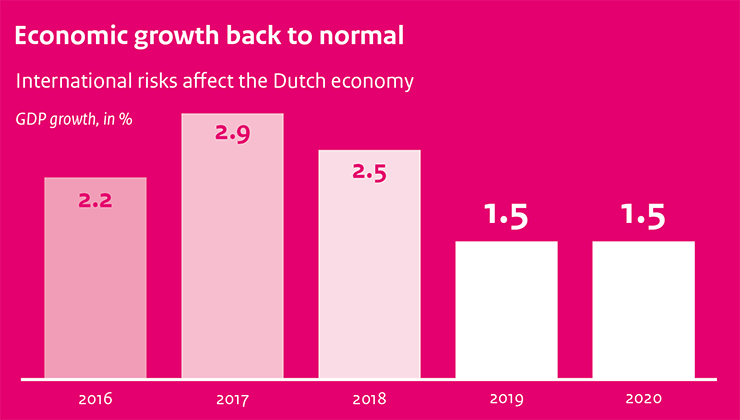 Event (in Dutch only)

Event (in Dutch only)