A Social Cost Benefit Analysis of Road Pricing in the Netherlands

In the Netherlands, many political parties consider road pricing as an important instrument to improve accessibility. In 2012, 6 of the 10 parties had included some form of pricing policy in their election manifestos. The most recent SCBA of road pricing in the Netherlands dates from 2007. Since then, much has changed. 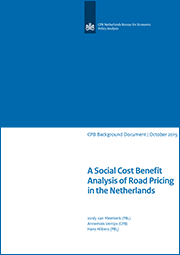 For example, road congestion has decreased and new pricing systems have entered the market. Furthermore, a new version of the Dutch National Transport Model (Dutch: LMS) has been implemented.

The main benefits associated with road pricing are reduced travel time, increased travel reliability, fewer traffic accidents and emission reductions. However, road pricing also leads to welfare losses due to a reduction in demand, a reduction in revenues from excise duties and both direct and indirect financing costs. Furthermore, the charge may increase the overall cost of a journey. This has a negative effect on accessibility for people and companies. A decrease in accessibility can lead to negative agglomeration effects. On the other hand, the average total journey costs can also decrease as a result of road pricing, which would improve accessibility, leading to positive agglomeration effects.

This paper focuses on four road pricing schemes for passenger vehicles. A flat rate charged on all roads, a congestion charge during peak hours on highly congested roads, a combination of these two, and a flat rate during peak hours on the main roads in western and central Netherlands. For the traffic implications of these pricing schemes we used the Dutch National Transport Model.

The SCBA uses the socio-economic long-term scenarios Global Economy (GE) and Regional Communities (RC) from the study Welfare, Prosperity and Quality of the Living Environment (Janssen, L.H.J.M. et al., 2006). The differences between the two scenarios are substantial. Under the GE scenario, the Netherlands is more prosperous and has a larger population than under the RC scenario.

Whether pricing is socially beneficial, strongly depends on the chosen form and scenario (congestion level). With an increasing population and an expanding economy, we expect more traffic and congestion. In that case, road pricing is expected to be more socially beneficial. A large part of the social benefits are travel time benefits caused by reduced traffic congestion. Pricing policies specifically aimed at congested roads during peak hours are therefore efficient if the costs remain limited. The congestion charge has a small impact on total car use, but reduces congestion more efficiently, compared to a flat rate. Because cars are becoming safer and more energy efficient, the reduction in the external effects of road pricing is limited. The welfare loss, due to reduced demand, and the system costs outweigh the benefits of reduced congestion in case of a flat-rate pricing scheme, unless the congestion level is very high, as is the case under the GE scenario. 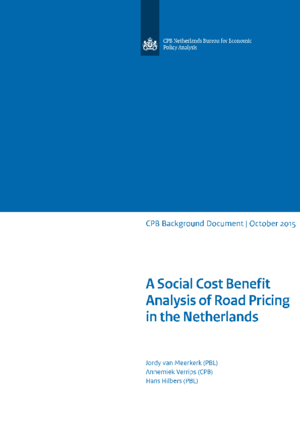