The papers put together in this publication are the half-yearly reports of two working groups of the AIECE, in which the CPB actively participates.

The reports, presented on behalf of the groups, form the synthesis of views of many institutes and have their value as such. They do not necessarily reflect the opinion of the reporting institute itself.

AIECE is the Association of European Conjuncture Institutes, (in French: Association d'Instituts Européens de Conjoncture Économique), founded in 1957. The AIECE now groups 42 members and observing institutes, representing 20 countries and 4 international organisations (EU, OECD, IMF and ECE). The membership is open to independent European institutes involved in surveying economic development and macroeconomic forecasting. Independent is interpreted as not directly being involved in conducting economic policies and not representing some economic interests. The main objective of the association is to intensify the exchanges between its members with a view to improve their insight into international economic developments.

The CPB is a long-standing member of this organisation, which is appreciated as a valuable platform for exchange of views with mostly non-governmental institutes, next to the Bureau's official contacts with in particular OECD and EU. Moreover, it is a useful source of information when making CPB-forecasts.

Twice a year world economic issues are discussed in the plenary meetings of the AIECE. Major points on the agenda are the general report on the European conjuncture, prepared in turn by one of the institutes, and the presentation of selected special studies. Two standing working groups report on respectively the development of world commodity prices, and on world trade. In a special session reports are discussed on longer-term prospects and structural changes. These reports are meant to give a general assessment of developments in the respective fields. As the results may be interesting also for a wider public, the CPB publishes the working group reports in its Working Paper series. 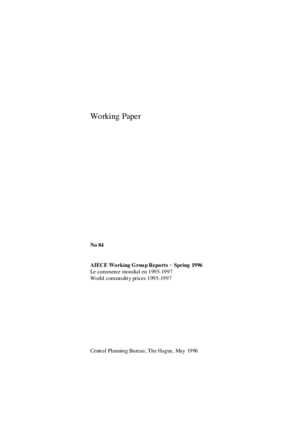