Brexit costs for the Netherlands arise from reduced trade

Press release
If the United Kingdom (UK) withdraws from the European Union it will affect the Netherlands more severely than other EU countries because of the strong trade relations between the Netherlands and the UK. A reduction in trade could amount to a GDP loss for the Netherlands of 1.2%, or 10 billion euros, by 2030. Less trade may also induce less innovation, which could amplify the GDP loss of 10 billion euros by another 65%. This is one of the conclusions of CPB Netherlands Bureau for Economic Policy Analysis in their study on the costs of Brexit.

If the UK were to withdraw from the EU, this would be followed by a period of uncertainty which would lead to direct economic losses. However, the more substantial losses for both the UK and the EU occur in the long term, because their economies will gradually have to adapt to changing trade patterns. First of all, trade costs will increase due to import tariffs. Next, trade barriers will arise from differences in technical specifications or the environmental standards goods have to comply with before being allowed to be sold either within the EU or the UK.

Brexit-related costs will be sector specific. For the Netherlands, the ‘other transport’ and ‘transport equipment’ sectors will hardly be affected, as the connection through trade with the UK in these sectors is only limited. However, this does not apply to certain other sectors, such as ‘chemicals, plastics and rubber’, ‘electronic equipment’, ‘motor vehicles and parts’, ‘the food processing industry’ and ‘metals and minerals’, which together account for 12% of Dutch GDP. These sectors will suffer production losses of around 5%.

If the EU succeeds in agreeing a new free trade agreement with the UK, this will substantially reduce GDP losses. For the Netherlands, the GDP losses could be reduced by around 20%. Such an agreement would circumvent trade tariffs and set standards and regulations with which both the UK and the EU would need to comply, although this will not fully restore access to the internal market.

If the majority of voters in the UK would choose to leave the EU, we assume the actual withdrawal of the UK from the EU will take two years to complete. Next to that, the UK may enter a renegotiation process for various trade agreements that will likely last a number of years. This will involve some uncertainty about the ultimate relationship between the EU and the UK, which will also affect the business community. The economic damage caused by that uncertainty will be the greatest in the short term and can already be seen in the run up to the UK referendum.

After a possible Brexit, the UK would become less attractive to foreign investors as a gateway to the EU. The EU may profit from that situation when those foreign investments are shifted from the UK to other countries within the EU. However, the more substantial losses for the UK and the EU will occur in the long term, as a result of economic adjustments caused by the increase in trade costs and the non-tariff barriers to trade (NTBs) between the UK and the EU. NTBs result from differences in technical specifications or environmental standards that traded products must meet before they are allowed to be sold within the EU.

The GDP losses in the Netherlands induced by a Brexit are sector-specific. Sectors such as ‘other transport’ and ‘transport equipment’ hardly will be affected, because they are connected more closely to the EU than to the UK. However, this does not apply to other sectors, such as ‘chemicals, plastics and rubber’, ‘electronic equipment’, ‘motor vehicles and parts’, ‘food processing industry’ and ‘metals and minerals’ (together 12% of Dutch GDP). These sectors could suffer production losses of around 5% – losses that could be reduced with 40% under a new free trade agreement.

Following a possible Brexit, the UK will have various options with respect to trade agreements with the EU. On the one hand, there will be the fallback option of the standard WTO regulations. According to such regulations, the UK will face the higher, external EU tariffs. If the UK, in addition, would decide to implement standards and regulations that deviate from those of the EU, this will create non-tariff barriers to trade.

On the other hand, it is possible to enter into a new free trade agreement that would result in a substantial reduction in trade costs. Such an agreement would circumvent trade tariffs and would set standards and regulations that would apply to both the UK and the EU. It would not be able to completely restore the current full access to the internal market, however. Should the EU and the UK reach a free trade agreement, the economic consequences of a Brexit for the Netherlands would be reduced by 20%, because one of the important elements of such an agreement would be that NTBs will increase by only 6%, instead of the 13% under WTO regulations. The other element of a free trade agreement would be the absence of trade tariffs for goods traded between the EU and the UK.

A new free trade agreement poses a dilemma for the EU. On the one hand, the EU wants to avoid the Brexit setting a precedent, or encouraging Member States to pick and choose from the different benefits and costs of EU membership. It would therefore want to increase the costs of the withdrawal as much as possible. On the other hand, this would then also lead to higher costs for the EU itself. A new trade agreement could reduce those costs for the EU– but also for the withdrawing country.

Furthermore, the Brexit-related costs are relatively low for countries in eastern and southern Europe, as they are less connected with the UK. Those countries, therefore, would benefit less from a new free trade agreement than countries such as the Netherlands, Ireland and Belgium. For this reason, it is conceivable that countries with a large economic interest in a new free trade agreement with the UK will not be able to muster the support of all EU Member States. 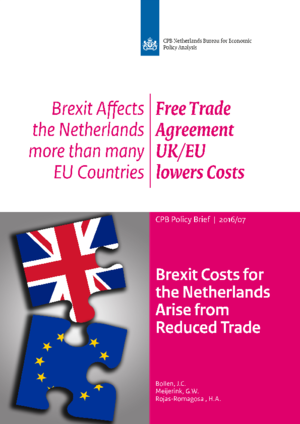 Trade effects of Brexit for the Netherlands

On June 23th the United Kingdom (UK) will hold a referendum on its European Union’s (EU) membership. Brexit will occur in the event of a leave vote and this will have far-reaching consequences. Brexit will affect all legal, economic and political relationships between the UK and the EU. In this paper we focus on the medium- to long-term trade consequences of Brexit. In particular, we look at the potential trade and macroeconomic effects that Brexit will have for the Netherlands.

This background document describes the methodology used to derive the numerical results used in the CPB Policy Brief 2016/07 entitled ‘Brexit costs for the Netherlands arise from reduced trade’.

In this background document, we focus on the medium- to long-term trade consequences of Brexit. In particular, we look at the potential trade and macroeconomic effects that Brexit will have for the Netherlands.  Given the uncertainty about the ultimate relationship between the EU and the UK after Brexit, we employ a scenario-based analysis that simulates the expected economic effects of the most likely trade policy outcomes.  In the first scenario, the trade between the UK and the EU will be bounded by WTO rules --i.e. tariffs will increase to the most-favoured nation levels and non-tariff barriers (NTB) costs will increase as a consequence of the UK leaving the EU's single market. In the second scenario, the UK successfully negotiates a free trade agreement (FTA) with the EU, but only after 10 years. Once this new FTA is in place, tariff levels will return to zero, but NTB costs will remain half-way between EU membership and the non-EU NTB levels.

We simulate these scenarios with WorldScan, the CPB in-house CGE model.  For both scenarios we find that Brexit will significantly reduce bilateral trade between the UK and the Netherlands, which reduces GDP and real income per capita. The size of the losses is directly related to the kind of the post-Brexit trade deal. The effects will be larger for the UK than for the rest of the EU.

The Netherlands has larger trade flows with the UK than the average EU country and will therefore suffer larger trade and GDP losses. Dutch GDP is expected to decrease by around 1.2% when Brexit leads to a WTO-based trade relation between the UK and the EU. If a trade agreement is reached after Brexit, the losses will be mitigated (0.9%) but still significant. Our main scenario assessment should be taken as a lower-bound estimation of potential economic losses from Brexit. First, we only consider the trade-related effects of Brexit and do not evaluate other potential economic impacts (e.g. short term volatility and adjustment costs, FDI, migration, and financial effects). Secondly, increased trade costs may generate changes in innovation that positively affect productivity which would aggravate the costs of Brexit for the Netherlands.

Trade effects of Brexit for the Netherlands
Pdf, 1.3 MB
Download