Analysis of the consequences of the current financial position of banks in relation to the mortgage and housing markets and, following from that, for the current situation of the Dutch economy. This study was to include both the economic and structural aspects of that relationship. This is a translation of the Dutch publication. 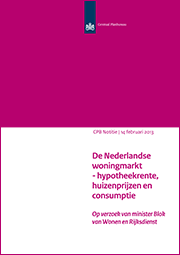 In a letter of 25 January 2013, with reference 2013-0000048142, the Minister for Housing and the Central Government Sector requested CPB Netherlands Bureau for Economic Policy Analysis to analyse the consequences of the current financial position of banks in relation to the mortgage and housing markets and, following from that, for the current situation of the Dutch economy. This study was to include both the economic and structural aspects of that relationship. CPB honours this request in so far as the questions can be answered on the basis of available expertise and research capacity, as was also indicated in our letter of 31 January with reference 13 00310.

In summary, we conclude the following:

- Mortgage interest rates in the Netherlands, according to European Central Bank (ECB) statistics, are around 1% higher than in the surrounding countries.

- There is no indication that the banks’ costs of financing through secured or unsecured debt or securitisation are systematically higher in the Netherlands than in the countries that surround us. For certain types of deposits, however, costs were found to be higher than in some other countries, although this does not apply to all types of deposits and all countries.

- The most likely explanation for the high Dutch mortgage interest rates is therefore not related to the higher costs of bank financing.

- There are three possible alternative explanations for the higher interest rates on mortgage credit:

- The Dutch National Mortgage Guarantee (NHG) reduces the risks on the Dutch mortgage market by insuring banks against payment defaults. Two questions relate to the NHG:

- House-price developments in the Netherlands since 1980 can be explained mainly by the fundamentals (income, capital, interest rates, housing supply).

- Real house prices have declined by around 20%, since 2008, and the historically low interest rate during those years has contributed to this decline. House prices would be around 5% higher than they are today if Dutch mortgage interest rates would be at the even lower EU average.

- Various factors have contributed to the decline in house prices over this period:

- The declining house prices are among the main factors that explain the reduction in consumption and the lower economic growth. Nearly half of the lower consumption levels over the 2008–2012 period may be explained by the decline in house prices.