This paper makes use of a new dataset to investigate energy intensity developments in the Netherlands over the period 1987–2005, in comparison with 18 other OECD countries. A key feature of our analysis is that we combine this cross-country perspective with a high level of sector detail, covering 51 sectors. 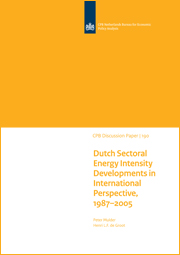