As a measure of school quality, we look at the performance of pupils at the nationwide standard test (the so-called Cito test) in the final year of primary education. Since competition is likely to be endogenous to the quality of schools, we use the distance between the school and the town centre as an instrument for the level of competition faced by a school. The intuition is that schools located close to the town centre, which are easily accessible to a large number of parents, face more competition than schools located further away from the town centre.

Using a large range of data on pupil, school and market characteristics, we find that school competition has a small positive significant effect on pupil achievement. An increase in competition by one standard deviation (comparable to 5 additional schools in the market) increases pupil achievement at the Cito test by five to ten percent of the mean standard deviation, so about less than one point. This result is robust to a large range of specifications. 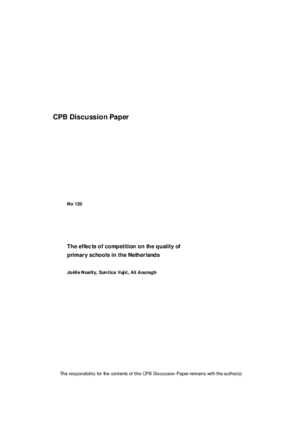 The effects of competition on the quality of primary schools in the Netherlands
Pdf, 288.2 KB
Download

Competition and regulationEducation and Science