In 2001 the European Commission proposed the introduction of a European system of trading in greenhouse gases. This proposal is currently subject to fierce debates.

The European Commission has proposed a method of direct allocation while others, like representatives of large industries, plead for an indirect method. In the former approach, permits are distributed directly to the group of firms that emit the gases. End-users of energy receive their permits in the latter method. Emitters and end-users of energy are the same group of firms only when use of energy coincides directly with emissions.

This is valid for the burning of natural gas for instance, but not for the generation and consumption of electricity. Emissions of carbon dioxide result from electricity production when power is generated by means of coal, oil, or gas fired plants. Consumption of electricity does not generate any emissions. Consequently, the direct allocation of permits implies that power plants receive the permits while electricity users obtain them when the indirect approach is followed. The debate on the method of allocation concerns its effects on the price of electricity and the competitiveness of large users of electricity. Questions that have to be answered are: “will power producers raise their prices if they obtain their permits free of charge?", and “to which extent does a rise in electricity price affect industries such as Steel, and Aluminium?". The Netherlands' Committee “Allocating emission permits" has asked the CPB to answer these questions. 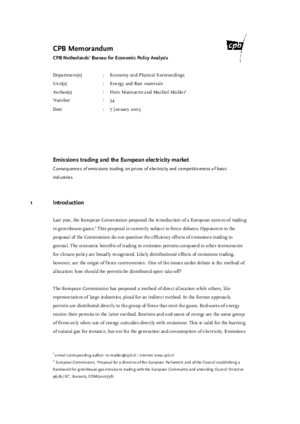