The paper tests the role of agglomeration effects on the export decision of services firms. Recent theories on trade with heterogeneous firms predict that export participation goes along with sunk market-entry costs. 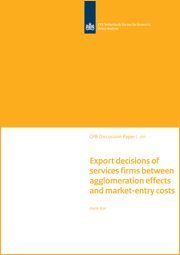 Only the more productive firms will be able to overcome these sunk costs. This leads to a process of - ex ante - self selection. These predictions are tested for the services industry, with due account for the possible role of agglomeration effects in large-city areas.

Standard empirical tests of the new trade models consistently find productivity-based ex ante self selection by exporters, and this effect is mostly explained by unobserved sunk entry costs that exporters have to absorb in new foreign markets. Recent research by urban economists (e.g. Combes et al., 2012) suggests, however, that operating in large-city areas also goes along with positive productivity sorting. Ignoring this leads to upwardly biased estimates of the effect of foreign market entry costs. A large set of micro data for establishments in Dutch services is used to investigate this hypothesis.

I find evidence that positive productivity self-selection is based on the combined effects of agglomeration and anticipated market-entry cost for export starters. This effect is strongest in markets with more or less homogeneous products. I also find evidence that the productivity self-selection effect (of exporters compared to non-traders) is stronger in non-urban areas and smaller agglomerations.