In most OECD countries, the financial crisis leads to a drop in GDP and has brought government finances into a state of disarray. As high public debt will slow down GDP growth, order in government finances must be restored, sooner or later. But by how much spending should be cut, or taxes increased, and at which pace should this be implemented?

What policy response would be optimal depends on whether a GDP shock is permanent or only temporary. The optimal response to a permanent downward shock would be slightly anti-cyclical initially, followed by a long period of gradual, permanent budgetary adjustments to curtail the public debt. When the downward shock is expected to be temporary, however, a strong expansionary response would be the best remedy. These types of shocks may be distinguished using a simple macroeconomic model; a temporary downward shock causes a considerable and immediate rise in unemployment, while under permanent shocks this is much less the case. For upward shocks, the opposite applies. It is often said that anti-cyclical policies are ineffective because policymakers react too slowly to shocks. However, even when the time to prepare policy is taken into account, an anti-cyclical response to a temporary shock can still be effective.

The timing of policy depends on the economic situation. Implementing spending cuts in the middle of a recession is unwise, because at that time the cost of such measures is the highest. Postponement gives the economy the opportunity to recover and may even contribute to strengthen public finances.

This analysis shows the importance of making policymakers aware of the difference in character between these types of shocks and of determining whether a particular shock will be permanent or temporary. Forecasters should outline this particular distinction. Temporary shocks should not be addressed by implementing spending cuts, but rather by expansionary policies. As temporary shocks are characterised by rising unemployment, a simple measure would be not to implement additional spending cuts when expenditures on unemployment and welfare benefits increase.

This publication is a translation of the Dutch publication 'Stabiliserend begrotingsbeleid'. 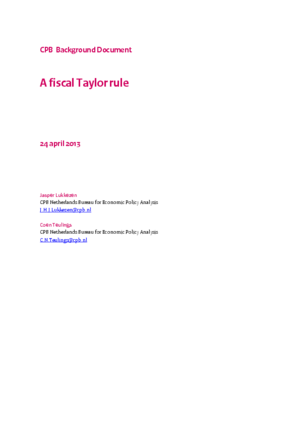