Funds and games; the economics of European cohesion policy

Press release
European cohesion policy is less successful than it could be. Cohesion policy aims at reducing differences in GDP per capita between regions within the European Union. Billions of euro are spent on regional projects that, among other things, improve infrastructure and modernise education.
Read the complete press release

Simulations with large macroeconomic models show that these projects could accelerate economic growth substantially. Analyses of the actual growth record of recipient regions reveal, however, that this potential materialises only to a limited extent. For some of the poorest regions in Europe this means they miss out on half a percentage point of annual economic growth.

Researchers Sjef Ederveen, Joeri Gorter, Ruud de Mooij and Richard Nahuis of CPB Netherlands Bureau for Economic Policy Analysis reach this conclusion in their study Funds and games: the economics of European cohesion policy, which has been released today.

The slack in regional convergence has various causes. First, a large part of cohesion support goes to relatively rich regions. Second, the applied allocation criteria cannot bring about that the projects with the highest rate of return will be selected. Third, national governments cut back on their own regional policy once support from Brussels becomes available. Approximately, one euro of cohesion support reduces national aid by seventeen cents, notwithstanding the requirement that supported projects are co-funded by the public and the private sector.

Reform is expedient given the gap between actual and potential impact of cohesion policy. Moreover, it is important in the light of the upcoming EU enlargement. The accession of a number of relatively poor Central and Eastern European countries stretches the cohesion budget. The political tension between net contributors such as Belgium, The Netherlands and Germany, net receivers such as Greece, Ireland, and Spain, and future beneficiaries such as Hungary, The Czech Republic and Poland, becomes increasingly apparent. A more efficient cohesion policy could ease this tension. The study points out three tentative reform options. A possible direction for reform is more control by the European Commission.

Alternatively, one could confine cohesion support to fiscal transfers, and leave the spending details up to the Member States. A third option is to distribute the funds on the basis of a competition between distinct projects.

Cohesion support comprises the Structural Funds and the Cohesion Fund. After the Common Agricultural Policy it is the second largest item of the EU-budget: between 2000 and 2006, more than 200 billion euro will be allocated to regions and Member States that lag behind in development, have industries in decline, or face high unemployment. This amounts to more than 40% of the EU budget. It makes the distribution of funds subject to vigorous negotiations, which will only gain importance with the upcoming enlargement of the EU by twelve relatively poor new Member States.

The goal of cohesion policy lacks precision in official documents. It is, however, to be interpreted as to reduce the welfare differences among European regions. Views differ as to whether cohesion policy is successful. On the one hand, the European Commission is positive: in its Second Report on Economic and Social Cohesion it praises the effectiveness of current cohesion policies (EC, 2001b). On the other hand, some commentators take a more pessimistic view. Boldrin and Canova (2001) for example claim that cohesion policy is ineffective because it is primarily motivated by political considerations other than the reduction of welfare differences.

This study contributes to the discussion on the effectiveness of cohesion policy in two ways. First, it comprehensively reviews case studies, simulation models and econometric estimates, something that has not been done before with the same degree of thoroughness. From this review, we conclude that there is certainly scope for improvement in the effectiveness of cohesion policy. Secondly, the study makes use of the best-available data sources on cohesion policy to assess its impact upon redistribution and growth. This contributes to the relatively meagre body of econometric evidence. The results confirm some degree of redistributive efficiency: poor regions get more than rich regions.

It remains, however, unclear, to what extent cohesion support affects convergence. Some econometric analyses suggest that the funds have a negligible, or even a negative impact on convergence, while in others imply a significant positive impact. The study also makes use of a unique data set on national regional policy to estimate the extent of crowding out, i.e. the adverse impact of European funds on national regional support. This turns out to be an important phenomenon. How can cohesion policy be made more effective? The study considers various dilemmas that policy-makers face when thinking about cohesion policy reform. It also elaborates on how these dilemmas will change with the enlargement of the EU, and puts forward a number of directions for reform. 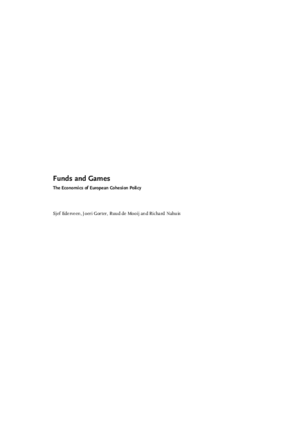