Gas exploration and production at the Dutch continental shelf: an assessment of the 'Depreciation at Will'.

The DAW enables firms to accelerate deprecation of investments in platforms and other offshore equipment. The interest advantage due to the postponed payments of taxes raises the profitability of investment projects and, hence, could raise the level of investments.

The key question in the debate on the DAW is whether the higher tax base compensates for the interest losses due to postponed tax receipts. The econometric analysis has shown that the DAW increased only the number of development drillings during the period this measure was implemented (1996-2002). A moving long-run average of the oil price has appeared to be a significantly explaining variable behind the level of exploration drillings as well as development drillings. Using the current value of that oil price, 25 dollar per barrel, we find a large number of profitable exploration projects. In the current circumstances, introduction of the DAW will not raise the level of investments in the near future, as several non-financial factors appear to be bottlenecks, such as the duration of licensing procedures.

The econometric analysis is also published in A. ten Cate en M. Mulder, 2007, "Impact of the oil price and fiscal facilities on offshore mining at the Dutch Continental Shelf", Energy Policy, vol 35, pp 5601-5613. 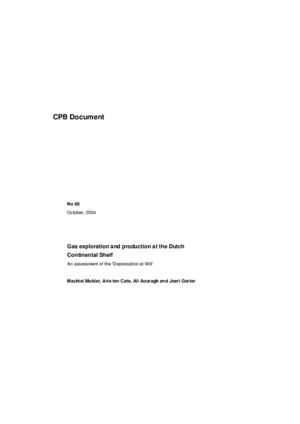 Gas exploration and production at the Dutch continental shelf: an assessment of the 'Depreciation at Will'.
English, Pdf, 650.6 KB
Download

Gas exploration and production at the Dutch continental shelf: an assessment of the 'Depreciation at Will'.
English, Pdf, 48.6 KB