From the theoretical literature, we find that there are several explanations to account for persistent surpluses. The case of the Netherlands fits into some of these theoretical explanations: relative high income levels, developed financial system, ageing population, member of the EMU and presence of natural gas. 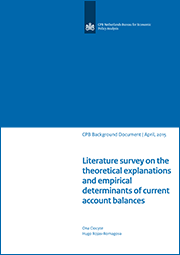 The empirical literature on the current account determinants identifies additional factors that can explain a current account surplus: positive net foreign assets (i.e. a positive NIIP), relatively low expected GDP and productivity growth, a higher share of working age population and a higher old-age dependency ratio forecast, sustainable fiscal policies, and financial liberalisation. However, most of the empirical studies also have the limitation of having a large unexplained component for the Dutch CAB.

The main conclusion from this survey, is that the current account balance is the end-result of several economic decisions –saving, foreign and domestic investment, trade and international finance– that are made by several economic agents (firms, households and government) over time. As such, both theoretically and empirically there are a large number of variables that affect the CAB. Moreover, it is not trivial to assign the comparative contribution of these determinants and variables. Therefore, it is hard to explain the CAB using only a few variables, but it is necessary to understand that many determinants (some of them related) are important.

Using the external balance assessment (EBA) developed by the IMF (2013) it is possible to obtain a general view on how the overall explanation of country-specific CAB fairs. In the case of the Netherlands, the EBA analysis finds that both the cyclical and the policy gap components are not very significant in explaining the overall surplus, while fundamentals explain less than half of the surplus. Roughly the same results are found by the European Commission (2014). Thus, both studies do not perform well when analysing the Dutch surplus by using traditional CAB determinants. This leaves open questions regarding the other important factors explaining the Dutch large and persistent surplus. Other factors that are not usually included in the empirical studies seem to be significant: the Dutch pension funds, the role of MNEs head-quartered in the Netherlands and the Eurozone imbalances. These factors are further explored in an accompanying background document (Jansen and Rojas-Romagosa, 2015).

Meer toezicht nodig op omvangrijke Europese financiële instellingen, CCP’sEuropees schokfonds kan welvaart verhogen The Netherlands is an important link in the chain of diverting income flows: broader use of withholding taxes is necessary to combat international tax avoidance The effects of globalisation in the Netherlands: A theoretical and empirical surveyTrade Wars: Economic impacts of US tariff increases and retaliations, an international perspective