Potential economic effects of TTIP for the Netherlands

The Netherlands has economic interest in EU-US trade agreement

Press release
The Transatlantic Trade & Investment Partnership (TTIP) could potentially double Dutch exports to the United States; thus increasing GDP by around 1.7% by 2030. This is concluded by CPB researcher Hugo Rojas-Romagosa in his study on the possible impact of TTIP on the Dutch economy. The research only looked at TTIP’s economic impact.
Read the complete press release

In order to achieve such a Transatlantic Trade & Investment Partnership, the European Union and the United States have been negotiating since 2013. When these negotiations will be completed is as yet unknown. The main economic effects of TTIP are expected to result from the abolishment of customs duty and the uniformity in regulations. The degree of this uniformity is part of the negotiations.

On this subject, the European Commission is sticking to its own standards, which are non-negotiable. The Netherlands will benefit more from such a new trade agreement than the average EU Member State. Dutch exports to the United States have the potential to increase by 95%, due to lower tariffs and the non-tariff barriers to trade (NTBs). In the long term, this would have a positive impact of 1.7% on GDP in the Netherlands, whereas GDP in the EU and the United States would increase by about 1%.

TTIP will cause a shift in production and employment between sectors. The food processing sector and chemical sector could expect around 5% increase in production and employment, while the metal and transport sector would see a decrease. This impact is according to analyses using the CPB WorldScan model, which is used in the analysis of long-term issues of the international economy.

Negotiations between the EU and the US are still ongoing. To estimate the potential impact of these negotiations, we use a scenario analysis. It is expected that the main economic effects of TTIP are generated by abolishing customs duties and aligning regulations. This harmonization is done without lowering the standards which are non-negotiable according to the European Commission. In the baseline scenario, the existing tariffs are abolished and a partial harmonization of regulations results in a reduction of non-tariff barriers to trade of about 14%. In alternative scenarios, we vary the degree of harmonization, allowing for larger or smaller reductions in non-tariff barriers to trade.

Dutch exports to the US increase by 95% due to the reductions in tariffs and non-tariff barriers to trade. This ultimately has a positive effect on GDP in the Netherlands of 1.7%. These potential benefits are higher than those for the EU and the US (where GDP increases by about 1%). TTIP creates a shift in output and employment across sectors, which is, however, smaller than the normal sectoral shifts. TTIP also creates a shift of trade between countries. Because trade between the EU and the US increases significantly, it will reduce intra-EU trade and trade with third countries. However, the total output and the income effects in these third countries will be relatively small, the output drop is less than one percent and the decline in GDP remains close to zero.

The expected economic benefits can be considered as a lower bound, because we do not consider the potential impact of increased foreign direct investment, nor the dynamic benefits of trade in terms of competition, innovation and productivity. These results are consistent with other studies on TTIP, but are dependent on the final agreement. 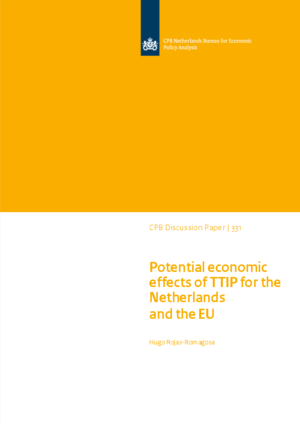