Scarcity of science and engineering students in the Netherlands

Scarcity of science and engineering (S&E) graduates could potentially call for government intervention, because of the role of S&E's in R&D, and because R&D in turn is characterised by positive spillovers. First, we analyse the situation on the Dutch labour market for S&E graduates. We do not find evidence for scarcity of S&E graduates. Rather, the labour market position vis-à-vis other graduates weakened. A possible explanation to reconcile this conclusion with a widely felt concern of S&E shortages among employers is increasing internationalisation of the S&E labour market.

Concerning policy, we argue that expanding the stock of S&E graduates is not very effective for boosting R&D activity. More than half the number of S&E graduates do not end up working in R&D. De increasing internationalisation of the S&E labour market can diminish the attractiveness of S&E courses. 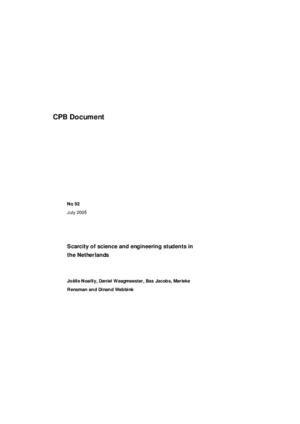 Scarcity of science and engineering students in the Netherlands
English, Pdf, 646.5 KB
Download