Sustainability Monitor for the Netherlands 2011

Many countries, including the Netherlands, have made sustainable development a policy goal: they seek to build a society in which the current quality of life can be maintained, and preferably improved, without damaging the development opportunities of future generations or of people elsewhere in the world. 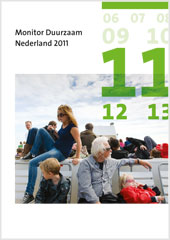 This publication is in Dutch, but an English summary is attached!

In this Monitor we draw on a large number of indicators to outline how the situation in the Netherlands is developing with respect to this goal. We conclude that, although the quality of life is high in the Netherlands, there are reasons for concern. Four groups of problems present the greatest challenges:

1. Environment and nature: Climate change presents a global threat to the environment and ecosystems. Biodiversity is declining throughout the world, including the Netherlands.

2. Financial sustainability: The level of Dutch government debt and the growing costs of health care and social security are causes for concern. It is no longer certain whether future generations will be able to count on the same level of health care services, pensions and other social benefits as the current generation.

3. Knowledge level: Knowledge is the key ingredient for continuing prosperity. The share of R&D in Dutch GDP is relatively low and the education level of the younger generations is mediocre in comparison with other European countries.

4. Disadvantaged position of non-westerners: Many non-western ethnic minorities in the Netherlands face disadvantages. For example, their unemployment rates are high and income differences with native Dutch citizens are widening.