The Impact of Uncertainty Shocks: Continental Europe versus the Anglo-Saxon World

For economic forecasting it is important to know how the real economy responds to major events such as the fall of the Soviet Union, the Greek debt crisis, the recent terrorism attacks in Europe, and the Brexit. In addition to potential direct effects, such major events lead to an increase in uncertainty about the economy and consequently firms will postpone their investments. This paper quantifies the economic consequences of the increased uncertainty.

For various countries, including the United States, Canada, United Kingdom, Germany, France, the Netherlands, and various small open economies, we have estimated the real economic effects of an increase in uncertainty, based on a structural Vector Autoregression with a similar specification as Bloom (2009). Our empirical results show that uncertainty shocks are followed by deeper recessions in Continental Europe than in the Anglo-Saxon World. Moreover, our variance decomposition indicates that the conditional variance of economic activity related to only uncertainty shocks is much larger in Continental Europe. We associate these findings with country heterogeneity in labor and capital market flexibility, since firms are less capable to deal with uncertain situations when investment and hiring decisions are less easy to reverse, as suggested by Bloom (2009) and consistent with the findings of Bartelsman, Gautier, and de Wind (2016).

The empirical results of this paper can be used for scenario analyses, and in fact have been used in Veenendaal, Grabska, Lanser, Ligthart, and de Wind (2014) for a CPB scenario about the conflict between Russia and the Ukraine (report only available in Dutch). Moreover, the upcoming MEV projections will include a scenario analysis on the short run after the Brexit and is partly based on the uncertainty effects analyzed in this paper. 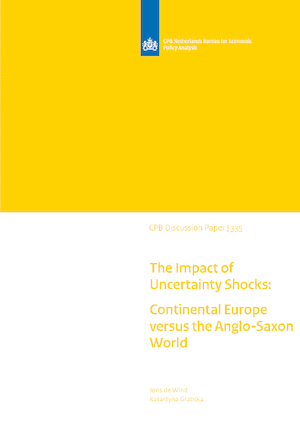