Why Did the Netherlands Develop so Early? The Legacy of the Brethren of the Common Life

In many Dutch cities there are Geert Groote schools. This is no coincidence, because Geert Groote's (1340-1384) ideas form the foundation of modern education in the Netherlands and many other countries. 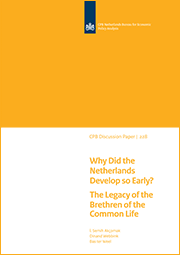 Much less known is that his investments, and those of his followers, have put the Netherlands on the pathway towards the Golden Age. In this study, we describe the mechanism by which the influence of Groote so impressive. Furthermore, we present econometric estimates that indicate a long-lasting legacy.

This research provides an explanation for high literacy, economic growth and societal developments in the Netherlands in the period before the Dutch Republic. We establish a link between the Brethren of the Common Life (BCL), a religious community founded by Geert Groote in the city of Deventer in the late fourteenth century, and the early development of the Netherlands. The BCL stimulated human capital accumulation by educating Dutch citizens without inducing animosity from the dominant Roman Catholic Church or other political rulers. Human capital had an impact on the structure of economic development in the period immediately after 1400. The educated workforce put pressure on the Habsburg monarchy leading to economic and religious resentment and eventually to the Revolt in 1572. The analyses show that the BCL contributed to the high rates of literacy in the Netherlands. In addition, there are positive effects of the BCL on book production and on city growth in the fifteenth and sixteenth century. Finally, we find that cities with BCL-roots were more likely to join the Dutch Revolt. These findings are supported by regressions that use distance to Deventer as an instrument for the presence of BCL. The results are robust to a number of alternative explanations.

The statistical programme used for the regression analysis and the data used for this research can also be downloaded below (attachment, if necessary rename the file as a .zip). 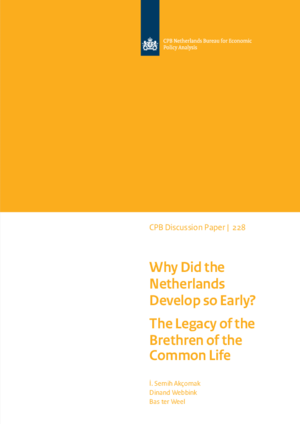 Why Did the Netherlands Develop so Early? The Legacy of the Brethren of the Common Life
Pdf, 3.3 MB
Download