For 2013, projected economic growth has not been adjusted compared to last December’s projections. Private consumption in 2013 will decline sharply (-1½ percent), as it did last year. Housing investments are projected to decline even more – by 7%. In contrast, the export of domestically produced goods shows signs of recovery. Despite this fact, GDP volume will fall for the second consecutive year, by 0.5%, following the drop of 0.9% in 2012. This causes employment to decline again and unemployment therefore to rise further, to 6¼ per cent of the labour force.

The projected recovery for 2013 will become evident in the year-on-year figures for 2014, at which time growth will return, by 1%. The limited recovery largely will be due to a more positive development of the global economy under less elaborate deficit-reducing measures than those in effect for 2013. Domestic spending, however, is not expected to contribute to this growth and, despite this limited growth, unemployment will continue to increase up to 6½ per cent.

In 2013, the sizeable deficit-reducing measures will cause the budget deficit to increase by 0.7% of GDP to 3.3%, with a subsequent marginal increase up to 3.4% in 2014. The Maastricht criterion of a 3% maximum deficit will be exceeded in 2013 by 2 billion euros and in 2014 by 3 billion. These exceedances are accomplished despite substantial incidental factors (e.g. telecom auction, the SNS Bank’s nationalisation, one-off resolution levy, higher recession-related dividend from Dutch Central Bank) which on balance will have a positive effect on the budget deficit (1 billion euros in 2013 and 2 billion euros in 2014).

These are the main figures of the Central Economic Plan 2013 (Centraal Economisch Plan 2013 (CEP)). The publication will become available in full on 13 March next, when CPB Director Teulings will provide further information on these projections during the press conference at the Nieuwspoort press centre in The Hague (at 9:30 a.m.) Members of the press who wish to attend the press conference are requested to register in advance by contacting CPB spokesmen Edwin van de Haar (e.r.van.de.haar@cpb.nl) or Dick Morks (morks@cpb.nl). 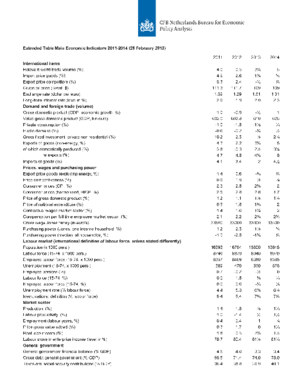