CPB: Slight economic recovery and EMU balance under 3 per cent

Press release
The Dutch economy is slowly on the path to recovery, in the slipstream of the euro zone, with a projected ¾% growth this year and 1¼% for 2015. For the current year, unemployment is expected to increase further up to 650,000 people, but will decline again next year as a result of improving employment opportunities.

Improvement in both the global and the European economy will drive economic growth in the Netherlands through an increase in export. With regard to domestic spending, investments in particular will increase, and for 2015 consumption is projected to increase for the first time in years, in line with a growth in wage income and benefits. Employment will continue to decline this year as a result of last year’s decrease in production and because companies, in the first instance, will step up production by reducing underutilisation. For next year, however, labour demand is expected to improve and unemployment levels to decrease slightly, to 635,000 people.

Inflation levels are projected to remain moderate for both this year and the next. Upward wage developments are expected to be modest due to the labour-market situation. On balance, this will result in a slight increase in real wages. Median purchasing power will improve by 1¼% this year, as a result of lower health-care premiums (-100 euros), lower pension fund premiums, and partly related policy measures, such as the one-off reduction in the rate of the first tax bracket. Purchasing power is projected to improve less strongly in 2015; among other things, as a result of an increase in health-care premiums (+145 euros).

For the first time since 2008, the government deficit will be below the Maastricht Treaty maximum budget deficit of 3%, and is projected to decrease further to 2.1% of GDP, next year. This relatively strong improvement on 2014 is in line with the decrease that could already be seen in the assessment of the Government Agreement of the Rutte–Asscher Cabinet. The decrease is largely the result of earlier budget agreements.

These are the main economic indicators in CPB’s Central Economic Plan 2014 (CEP). The publication will become available on 18 March of this year, when CPB Director Laura van Geest will provide further explanation of the projections during a press conference at Perscentrum Nieuwspoort (starting at 9.30 a.m.). Journalists interested in attending the press conference are obliged to register with CPB spokesperson Edwin van de Haar (e.r.van.de.haar@cpb.nl, +31 (0)70 338 34 77).

The revision of the National Accounts as previously announced by Statistics Netherlands has not been incorporated in this forecast. This will not be done until next September in the Macro Economic Outlook 2015. 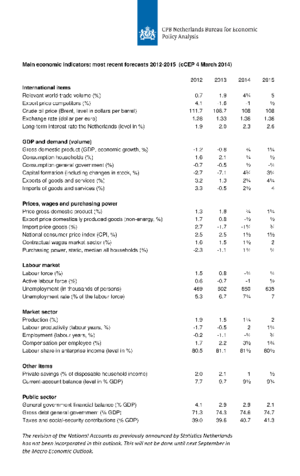