Macro-economics of balance-sheet problems and the liquidity trap

Since 2010, nominal policy rates of central banks in most advanced economies have been close to zero. This is referred to as the zero lower bound on interest rates or as the liquidity trap. At the zero lower bound central banks can no longer lower nominal interest rates, which means that they cannot stabilise the business cycle and prevent deflationary pressures on prices by doing so. In addition, in many countries, homeowners, firms and banks have gotten into trouble due to bursts of real-estate bubbles, particularly in Ireland and Spain, but also in the Netherlands. This has caused balance-sheet problems.

In response, firms and households in many economies are reducing private debts that have been built up in the past. This process of deleveraging involves reductions in aggregate demand and downward pressure on prices. Moreover, balance-sheet problems may have contributed to the emergence of the liquidity trap, since debt reduction increases the supply of savings and pushes real interest rates down.

Both balance-sheet problems and the zero lower bound have a major impact on macro-economic outcomes and on the macro-economic impacts of government policy. The CPB Policy Brief Lessons learnt from seven years of stagnation in the Eurozone, by Lukkezen and Kool, discusses these issues and presents policy recommendations. This background document supports that study and analyses the economic consequences of balance-sheet problems and the liquidity trap in an IS/MP–AD/AS model (IS/MP: Investment Savings/Monetary Policy; AD/AS: aggregate demand/aggregate supply). This is a simple business-cycle model based on the IS/LM model (investment savings/liquidity preference – money supply), which is expanded with a Taylor-rule for monetary policy and a Philips-curve for aggregate supply. Our model describes a large, relatively closed economy, such as that of the Eurozone. Our model generates seven main findings.

Second, when balance-sheet problems are very severe or when the zero lower bound remains binding, the economy does not automatically revert to its long-run macro-economic equilibrium, but may slide down into a (debt-)deflation spiral with economic stagnation. Unresolved debt problems and an ongoing liquidity trap may even land the economy in secular stagnation (Summers, 2014). The economy can only fully recover, and stagnation scenarios can only be avoided, when monetary policy is no longer constrained by the zero lower bound and balance-sheet problems have been sufficiently resolved.

Seventh, similar reasoning applies to structural reforms. Normally, structural reforms speed up the economic recovery, both in the short and in the long run. In the short run, larger aggregate supply puts downward pressure on prices, allowing the central bank to cut interest rates. This boosts aggregate demand and results in a more rapid economic recovery. In the long run, structural reforms increase future household incomes and firm profits. This implies that households and firms are also more willing to consume and invest today. However, if interest rates are stuck at the zero lower bound or when balance-sheet problems are severe, the ‘paradox of toil’ may apply: structural reforms may damage the economy in the short run. Larger aggregate supply causes the output gap to increase. When aggregate demand does not sufficiently increase – because households and firms will be richer in the future – net deflationary pressures will increase, causing stronger (debt-)deflation dynamics. 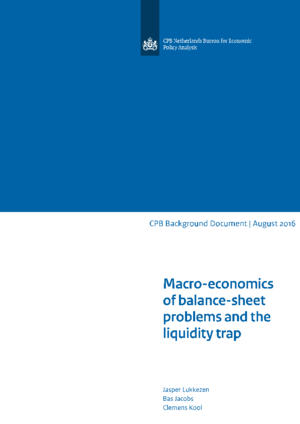