Assessing the economic implications of Turkish accession to the EU

Press release
The possible accession of Turkey to the EU will have small but positive effects on the European economy. EU exports to Turkey can increase by 19% in the long run. Welfare may increase by 3 billion euro.
Read the complete press release

These are some of the conclusions of the report 'Assessing the economic implications of the Turkish accession to the EU', published today by CPB Netherlands Bureau for Economic Policy Analysis. Arjan Lejour, Ruud de Mooij, and Clem Capel have written this report in light of the decision to be taken at the end of 2004 by the European Council about the possible start of the accession negotiations with Turkey.

Discussions about EU membership of Turkey are primarily of a political nature but the economic implications are also important. This discussion mainly concentrates on the implications for the EU budget. Some studies found that, under the current rules, Turkey would receive a substantial net inflow of EU funds. This inflow then needs to be financed by the current member states of the EU. The budgets for structural funds and agricultural policy are uncertain, however, because the political negotiations on the future EU budget are not finished yet.
Besides the budgetary consequences, Turkish accession has also consequences for the European economy, by market integration. Turkish firms will get access to the EU internal market, export and investment possibilities for EU firms at the Turkish market will increase, and Turkish employees will get access to the labour markets in the EU. This CPB document focuses on these latter economic implications. Three main components of the Turkish EU membership are considered:

The choice for these components implies that some other potentially important economic effects are ignored, such as accession to the Economic and Monetary Union (EMU), and the implications of cohesion policy and the common agricultural policy. Moreover, as we concentrate on trade effects, the implications via foreign direct investment into Turkey are also ignored.

Accession of Turkey to the internal market

A major aspect of the accession of Turkey to the EU involves the internal market. In particular, Turkey would have to conform to EU law and EU rules. Fulfilling these criteria will require reforms in Turkey and will probably involve short-run costs. In the longer term, it may affect the economies of Turkey and the EU via more intense trade relations. First, administrative barriers to trade, such as customs procedures, will be eliminated or at least reduced to levels comparable to those between current EU members. Second, accession to the internal market implies a reduction in technical barriers to trade. Finally, risk and uncertainty will be mitigated by Turkey's accession to the EU. The Turkish political and macroeconomic stability may improve, for instance resulting in a stable exchange rate of the Turkish Lira and lower inflation.
The researchers estimate the size of the current trade barriers between the EU and Turkey. Subsequently, they simulate the removal of these barriers. The results suggest that Turkey will experience an additional annual welfare gain (measured by private income) of 3.5 billion euro, equivalent to 1.4%. This reflects the gains from integration, such as specialisation and trade creation. The effect for Turkey is larger than that for the current EU member states. For them, the macroeconomic impact is positive, but negligible in quantitative terms. The reason is that only a small fraction of European exports flow to Turkey, while the major part of Turkey's exports flow to the EU. EU exports to Turkey can increase by 19%.
The production of textiles in Turkey is expected to increase most, namely by about 18%. The Central and Eastern European countries acceding to the EU in 2004, will experience a small reduction in the production of textiles due to increased competition from Turkey on the internal European market. Yet, overall welfare in Central and Eastern Europe will also increase slightly.

To the extent that EU membership acts as a catalyst for institutional reforms in Turkey, this can have important implications for the Turkish economy. In particular, better institutions, less corruption, and a better functioning of the government can improve the trade and investment relations of Turkey with other countries. The researchers have estimated that these institutions are of significant importance for trade. To illustrate, if Turkey would succeed in improving its institutions to a level comparable to Portugal - slightly below the EU-15 average, aggregate trade of Turkey could increase by more than 50%. Income per capita will increase by about 9%, which is 22.5 billion euro. Also EU countries would benefit. EU welfare will rise annually by 7 billion euro.

Large income disparities between Turkey and the EU provide incentives for Turkish people to migrate to the EU. On the basis of existing studies on the migration potential for Central and Eastern European countries, the study predicts that 2.7 million people are likely to move from Turkey to the EU in the longer term (which is about 15 years after accession). The majority of these people will settle in Germany, where Turks have settled in the past as well. On the assumption that Turkish immigrants occupy low-skilled jobs, as was in the past, GDP falls in Turkey, while it slightly increases in the EU. Since the corresponding effects in terms of population are larger, income per capita rises in Turkey and slightly falls in the EU. Wages of low-skilled workers in the EU could fall by almost 1% relative to those for high-skilled workers if migrants compete for low-skilled jobs. If Turkish migrants would have the same skills as EU workers, migration would not have any impact on the wage distribution.

We focus on three main changes associated with Turkish membership: (i) accession to the internal European Market; (ii) institutional reforms in Turkey triggered by EU-membership; and (iii) migration in response to the free movement of workers.

Overall, the macroeconomic implications for EU countries are small but positive, through cheaper imports and the benefits from trade creation. Dutch exports increase by around 20% (550 million euro). Turkey experiences larger economic gains than the EU: consumption per capita is estimated to rise by about 4% as a result of accession to the internal market and free movement of labour.

If Turkey would succeed in reforming its domestic institutions in response to EU-membership, economic growth in Turkey could increase more. In particular, tentative estimates suggest that consumption per capita in Turkey could rise by an additional 9%. These benefits would spill over to the EU. For instance, Dutch exports to Turkey would rise by another 1.8 billion euro and income by 500 million euro. 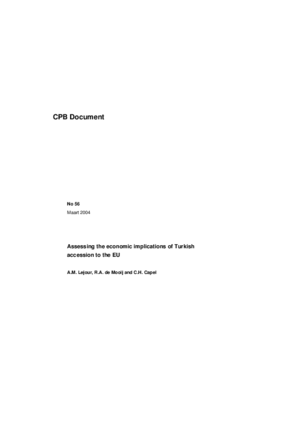