The changing landscape of financial markets in Europe, the United States and Japan 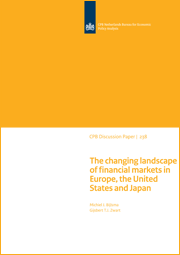 Using principal components analysis, we identify robust groups of EU countries. One group consists of the Eastern European members that entered the EU more recently. These have substantially smaller financial sectors than the old member states. A second group can be classified as market-based (MBEU) and the third group is more bank-based (BBEU). We compare US, MBEU, BBEU, Eastern EU and Japan with the following main results. First, the groups within Europe are geographically related. Second, in many indicators, MBEU countries are closer to the (market-based) US, while BBEU countries more closely resemble Japan. Paradoxically, however, market-based EU countries also have large banking sectors. Banks in market-based countries have larger cross-border assets and liabilities, and derive a larger fraction of their income from fees, rather than interest income, than banks in bank-based countries. Finally, for most indicators, the ordering of groups of countries is quite stable over time, but while the crisis has had no impact on the relative ordering of the groups, it has slightly widened the gap between the US and all EU regions in some respects. We also find that during the crisis, substitution between marketbased and bank-based sources of finance occurred in the US, and to a lesser extent in MBEU and BBEU countries.