Competition and stability in banking

No need for sheltering banks from competition

Press release
The study identifies a number of trends that will encourage competition among banks in the near future. These include the development of information technologies, deregulation., and disintermediation, that is, the removal or circumvention of banks as middlemen in the savers-borrowers chain.
Read the complete press release

Thus concludes CPB Netherlands Bureau for Economic Policy Analysis in CPB Document no. 15, Competition and Stability in Banking by Marcel Canoy, Machiel van Dijk, Jan Lemmen, Ruud de Mooij, and Jürgen Weigand). The study explores cases in which a potential trade-off between competition and stability in banking exists. The researchers also elaborate on how the government can optimally deal with such trade-offs. They analyse the trade-offs in three illustrations: corporate governance, the Dutch retail market and the market for secured deposits (the repo market).

Trust in the financial system is of vital importance for the functioning of economies. For many years, this 'trust' argument has been used to shelter banks from (intense) competition. Indeed, a failure of a bank differs from a bankruptcy of an ordinary firm. Competition can plunge badly performing banks into bankruptcy. Bankruptcy is a natural selection device, but it might also lead to an erosion of trust in the financial system. There are many ways, however, to enhance competition without endangering stability.

These developments may lead to the entry of new firms, such as Internet banks. The entry of these new players can destabilise the financial system, especially if these firms engage in risky behaviour and aggressive price competition. The fear of financial instability does not mean that entrants should be kept out of the banking market. Rather, it accentuates the crucial role of prudential regulation regarding entrants and adequate damage control whenever a problem appears.

Unlike the risk regarding entrants, intensified competition between incumbent banks has relatively little impact on financial stability. By eroding the rents associated with the previously low competitive forces, intensified competition will reveal better information about the performance of management and the effectiveness of corporate governance. Thus, intensified competition may eliminate adverse incentives for a bank's management who, for instance, may otherwise have incentives to take excessive risk and put their private interest above the firm's interest. In that way competition may improve the confidence of the public in the financial system by increasing transparency, accountability and responsibility of the management. It illustrates how the goals of competition and financial stability can coincide. The importance of good corporate governance also accentuates the task of bank supervisors to force banks to implement transparent ownership structures. One direction to achieve this is by not allowing (substantial) cross-shareholdings among competitors. 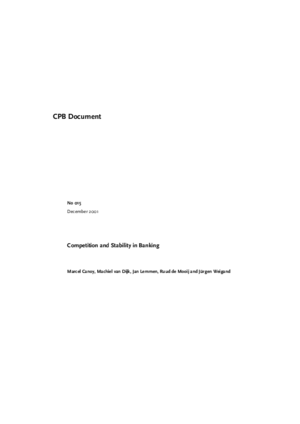