Small and medium-sized enterprises (SMEs) in Europe are highly dependent on bank financing. In the Netherlands roughly 80 percent of the SMEs finances themselves (partially) using external sources, mostly bank credit. In the aftermath of the 2008 global financial crisis, the profitability of European banks declined sharply and bank capital eroded, which in turn affected lending to SMEs negatively. Next to supply effects, also a deteriorating financial position of the firm or decreasing demand for its products could explain SMEs reduced access to financing.

In the Netherlands, the number of firm bankruptcies peaked in the aftermath of the financial crisis. Between 2009 and 2014 about 40,000 corporate firms defaulted, which is a 50 percent increase compared to the period before the global financial crisis. The question that this study addresses is whether, in the aftermath of the financial crisis, default probabilities of firms that depend more on external finance were affected more negatively than default probabilities of less dependent firms. We use balance sheet data of Dutch SMEs and information from the firm register obtained from Statistics Netherlands to answer this question.

These results should be interpreted with caution because of 4 reasons. First, they are based on firm endings of which the majority are voluntary endings instead of bankruptcies. Second, the data only include firms paying corporate income tax, which excludes self-employed individuals. Third, the data only include firms that already existed in 2003. Finally, our method does not identify the level of the effect of the financial crisis on ending rates, but only as a difference relative to the reference group. 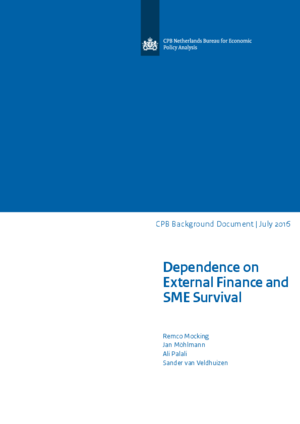