It involves the distribution of more than 35 billion euro annually, making it the second most important EU policy in budgetary terms. Its main aim is to reduce regional disparities in regional welfare.

This paper investigates to what extent European cohesion policy achieves this aim. The data reveal poorer regions do tend to receive more cohesion support. The policy thus satisfies a necessary condition for its effectiveness. It remains, however, unclear whether cohesion support significantly increases economic growth. In particular, the more independent convergence one presupposes, the less well cohesion support appears to work. This points at a clear trade-off: either one accepts that regional disparities are here to stay, or one concludes that cohesion policy fails. 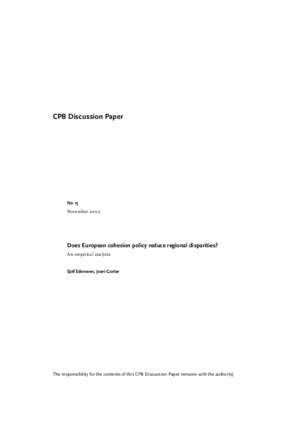