How much do children learn in school? International evidence from school entry rules

This study provides the first estimates of the causal effect of time in school on cognitive skills for many countries around the world, for multiple age groups and for multiple subjects. These estimates enable a comparison of the performance of education systems based on gain scores instead of level scores. 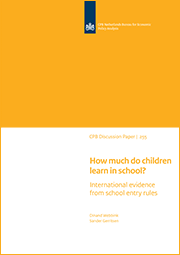 We use data from international cognitive tests and exploit variation induced by school entry rules within a regression discontinuity framework. The effect of time in school on cognitive skills strongly differs between countries. Remarkably, we find no association between the level of test scores and the estimated gains in cognitive skills. As such, a country’s ranking in international cognitive tests might misguide its educational policy. Across countries we find that a year of school time increases performance in cognitive tests with 0.2 to 0.3 standard deviations for 9-year-olds and with 0.1 to 0.2 standard deviations for 13-year-olds. Estimation of gains in co gnitive skills also yields new opportunities for investigating the determinants of international differences in educational achievements.