Internal and external forces in sectoral wage formation: evidence from the Netherlands

The purpose of this paper is to investigate the relative importance of internal and external forces in sectoral wage formation in the Netherlands (1967-1990).

The empirical specification is taken from a model proposed by Nickell and Wadhwani. The model is estimated by GMM (generalized method of moments) using annual data of 18 sectors. The results imply that sectoral wages are largely determined by external factors, although internal forces are significant as well. Compared to other research the influence of internal forces is smaller than in the US and Japan, but larger than in most other European countries. Furthermore, it is found that wages in the service sectors are more sensitive to external factors, like the macro unemployment rate and replacement ratio, than wages in the industrial sectors. This suggests that insider factors are more relevant in industrial sectors. 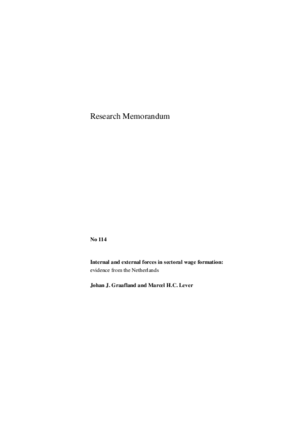