Literature survey on the economic impact of TTIP

In this paper we review, compare and assess the CGE- and SG-based studies on TTIP in order to draw conclusions on the expected economic effects of TTIP.

In this survey we review the main studies analysing the expected economic impacts of TTIP. CGE models are considered to be the state of the art approach in assessing trade policy in policy circles (Pelkmans et al., 2014; Mustilli, 2015), whereas they are considered obsolete among a group of academics Caliendo and Parro (2015)) who instead prefer structural gravity models. We think that both methodological approaches have merit. The compact and more transparent nature of the SG models can be valuable, even based on a single sector, if properly executed. A more extensive model, however, with multiple sectors, multiple factors, a realistic and detailed description of taxes and subsidies, capital, and imperfect competition in selected sectors; seems to be preferable, as it provides a more realistic description that generates more information for analysts and policy makers.

In fact there seems to be a tendency towards convergence in both literatures. CGE models are based more on structural estimation and structural gravity models have become more extensive over time. For example, the CGE-study by Egger et al. (2015) estimates the trade elasticities structurally, whereas the SG-model of Aichele et al. (2014) contains multiple sectors and intermediate linkages in deviation from earlier SG-studies with a single sector without intermediate linkages. However, Aichele et al. (2014) still lack important elements for trade policy analysis, such as the inclusion of multiple production factors, capital and imperfect competition. Multiple production factors are important to uncover possible differential effects on the factor wage, and the inclusion of capital and imperfect competition make the models more realistic.

Comparing the assessed studies we find that both differences in the estimated ad valorem equivalent (AVE) reduction in trade costs as a result of TTIP, and in the employed economic model drive the differences in the expected economic effects across studies. The most important difference in estimation of the AVEs is whether a bottom-up approach based on micro-data on NTBs or a top-down approach based on average FTA effects is chosen. Our assessment is that the reliable AVE estimates range between 3% and 14%. The most important difference in the economic modelling is the market structure in combination with the size of the trade elasticities. With an Armington or Eaton-Kortum perfect competition setting the effects are modest, whereas a monopolistic competition setting without a nested preference structure generates larger effects. With small AVE-changes around 3% and an economic model generating modest effects the real income gains of TTIP are around 0.2%, whereas large AVEs around 14% and a model generating relatively larger effects, generate real income gains around 2% on average for the EU and the US. Larger gains as produced by some studies are considered unlikely, either because they are based on unreliable AVEs reductions of 30% and more, or because they are based on a simulation model displaying methodological problems.

Using these parameters as reference, our preferred TTIP study is Egger et al. (2015). This study has the added benefit of combining both SG and CGE techniques.

Besides the overall economic effects described above (i.e. real income and welfare) TTIP is expected to affect other economic variables. In particular, transatlantic bilateral trade flows are expected to increase significantly. For instance, Egger et al. (2015) find a a substantial increase in bilateral trade flows between the US and the EU of 80%, that also causes trade diversion with third countries. These effects  correspond with the larger gains scenarios, therefore, lower but still significant bilateral trade increases are expected from the other studies.

Moreover, Egger et al. (2015) also find that total trade for both regions is expected to increase at around 5%. These increased bilateral and total trade flows generate positive real income gains of around 1 to 2% for the EU and the US, while third-countries remain broadly unaffected, with the exception of some particular countries that currently trade more intensively with the TTIP countries. The changes in trade flows, in addition, are associated with moderate inter-sectoral changes in production and employment. Labour displacement caused by TTIP will, however, be within the range of current year-on-year labour market mobility.

Research on the following three sets of topics would be highly useful for (applied) researchers trying to predict the expected effects of FTAs. First, more research is needed on the NTB effects of FTAs, and accordingly, robustness analysis should be conducted using alternative estimations for NTBs. Second, more research on the spillover effects of FTAs is highly needed, since little is known about it, both empirically and theoretically. Third, an evaluation of the impact of differences in modelling setups is required. What is the impact of multiple sectors, multiple factors, monopolistic competition, and different ways to include capital? The work by Costinot and Rodríguez-Clare (2013) provides valuable insights in this respect, but much more questions should be answered. This study, for example, does not address the effect of the way capital is modelled and the effect of non-homothetic preferences. 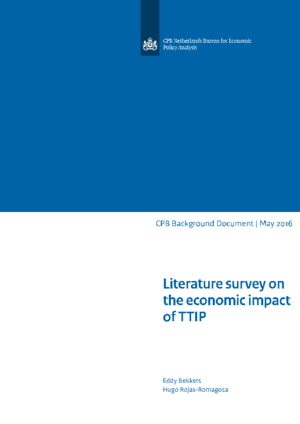