These projections are presented in CPB’s Macro Economic Outlook 2014, traditionally published every year on Prinsjesdag (the day of the King’s Speech, which sets out the main features of government policy for the coming year). This year’s CPB projections also include the Dutch Cabinet’s package of measures for 6 billion euros in additional spending cuts.

The Dutch economy in 2014 is projected to develop in a slightly less favourable direction than was estimated in the preliminary projections of last August. Projected economic growth (GDP growth) for 2014 now is adjusted downwards by ¼% to 1/2%, as is consumption, which is projected to decrease by 1% instead of 3/4%. These adjustments are the result of the additional spending cuts. There are three reasons why the macroeconomic impacts of these additional spending cuts will be only limited: because of a single reduction in the financial burden in 2013, the way the increase in financial burden (for 2014) is designed, and because it will take some time before the impacts become apparent. Median purchasing power in 2013 will decrease by 1¼% and in 2014 by ½%.

In its Macro Economic Outlook 2014, CPB provides detailed information about current developments in the Dutch economy, also from an international perspective. 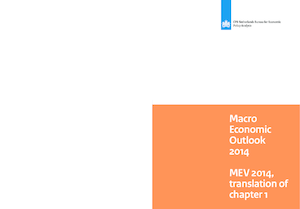 Four times a year CPB publishes short-term forecasts. This is the third forecast of 2013, CPB's Macro Economic Outlook (MEV) 2014. CPB presents its analyses and forecasts of both the Dutch and worldwide economy in the years 2013 and 2014. MEV 2014 is only available in Dutch but you can download an English translation of chapter 1. 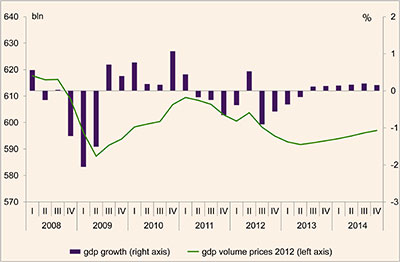 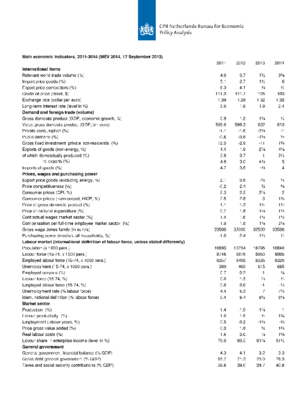