People Skills and the Labor-Market Outcomes of Underrepresented Groups

This paper shows that people skills are important determinants of labor-market outcomes, including occupational choice and wages. Technological and organizational changes have increased the importance of people skills in the workplace. 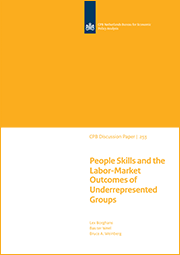 We particularly focus on how the increased importance of people skills has affected the labor-market outcomes of underrepresented groups assuming gender differences in interactions and that cultural differences (including prejudice) may impede cross-racial and ethnic interactions. Our estimates for Britain, Germany and the United States are consistent with such an explanation. Acceleration in the rate of increase in the importance of people skills between the late 1970s and early 1990s in the US can help explain why the gender-wage gap closed and the black-white wage gap stagnated in these years relative to the preceding and following years.