To answer the question "What is a prudent public debt-to-GDP ratio?" , we provide a tentative calculation of the gross debt-to-GDP ratio for which the gains of holding a larger buffer to ward off negative shocks equal the cost of transitioning to a lower debt level. This buffer is held as a precaution as, above a certain ratio, the relationship between government debt and economic growth becomes increasingly negative. A smaller initial debt level, then, reduces the probability that debt becomes so large in the future that it adversely affects economic growth. Naturally, the gains of increasing the size of the buffer are lower when current debt is lower. These gains are then combined with the costs of debt reduction via fiscal consolidation to arrive at this prudent debt level.

The focus in this calculation is on advanced economies. We thus rely on empirical research that assesses the effect of government debt on economic growth for advanced economies and we calculate the costs of debt reduction with Saffier, the structural model for the Dutch economy at CPB. We find the prudent debt level, being the level at which the gains equal the costs of reduction of the debt level, between 61% and 86% of GDP, with an average of 72%. The buffer is defined as the debt level above which negative effects materialize minus the prudent debt level and measures 20% of GDP. Historically, the probability that a negative effect materializes has been 18%. Caution is advised in using these debt levels as anchors for policy, as the costs of deviating from these numbers are small in this range while the benefits may be significant. Generally speaking, any debt level below this range seems prudent as well.

This CPB Background document is structured as follows: section 2 presents the precautionary savings motive for the government as an economic rationale for a buffer, in section 3 we perform some tentative calculations on the gains of having a larger buffer, section 4 presents the costs of debt reduction from the Saffier model, section 5 integrates both elements and calculates the prudent debt level and section 6 discusses these results and their limitations. 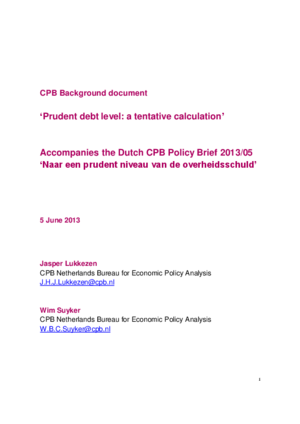