A Taste for Trips out of Town: Urban Sprawl and Access to Open Space

Residential development at the urban fringe raises the cost of trips to open space. We derive a simple expression for the tax that internalizes this effect of sprawl in a monocentric city andapply it using survey data on recreational activity. 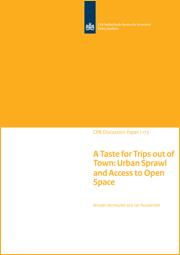 Urban sprawl is inefficient if landowners ignore the social value of open space in their decision to develop it. The absence of a market for open space amenities impedes reliable estimation of their value, so policies that control urban growth may be ill-informed (Brueckner, 2000). Our approach to this valuation problem relies on the well-established notion that travel costs of recreational activity serve as an implicit price (Hotelling, 1947; Phaneuf and Smith, 2006). We extend the conventional monocentric city model with a demand for ‘trips out of town’: recreation in large contiguous undeveloped areas like forests, wetlands or the countryside, for which open space within the urban boundary is an imperfect substitute. Urban expansion reduces accessibility of such ‘true open space’ for prior inhabitants. We derive a simple expression for the tax on conversion of agricultural land to urban use that internalizes this effect and apply it to the city of Amsterdam.

The travel cost approach has rarely been applied to the valuation of open space in or near urban areas (McConnell and Walls, 2005). In particular, most applied welfare analyses of open space provision in a general equilibrium framework have been based on capitalization of benefits into local property values. This entails a focus on comparably localized effects.1 Notably, open space amenities in Cheshire and Sheppard (2002) are confined to a surrounding squared kilometre. Walsh (2007) also considers the benefit of proximity to public open space, yet the average distance is only about one kilometre in his empirical application. In large cities, visits to true open space will generally require a much longer trip.