In the Netherlands owners of small corporations face taxation of corporate, labour and capital income. Taxation of the latter may be deferred. We study their options for income shifting using bunching techniques. 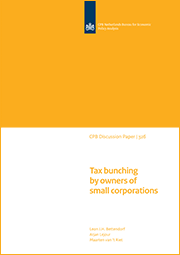 Based on individual tax records over the period 2007-2011 we report four main findings. The first is that the distribution of gross labour income strongly peaks at the legal 'minimum' level. Second, taxable labour income bunches at the cut-offs of the tax brackets. The elasticity of taxable income at the top tax cut-off ranges from 0.06 to 0.11. Third, we show that distributed profits strongly responded to the temporary tax cut from 25 to 22% in 2007, which doubled tax revenues on dividends. Fourth, using a Heckman selection model we find that the size of own equity has a positive effect on the probability of distributing profits and the size. We reconfirm the importance of intertemporal income shifting for business owners.