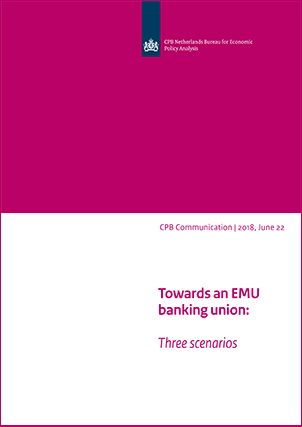 This publication discusses the need for an EMU banking union and describes three possible transition scenarios. The European Commission’s roadmap also contains proposals for other types of EMU reform (e.g. a budgetary union, capital market union or the introduction of a European Monetary Fund), but this publication only addresses the banking union. In addition to this report, the CPB will also publish a background document, titled ‘Capital position of banks in the EMU: an analysis of Banking Union scenarios’, in which calculations are presented that show the consequences of various elements of the banking union, for the largest banks within the EMU.

This publication is in Dutch, there is no English translation!
June 1, 2018

How do the Dutch Finance their Own House? – Descriptive Evidence from Administrative Data

We investigate the major financing components which are used to purchase a house in the Netherlands. This is important to shed more light on the effects of changing lending norms. We look at the full universe of housing transactions in the Netherlands by making use of administrative data from Statistics Netherlands (CBS) for the period 2006-2014.

First time buyers (‘starters’) make more use of other forms of equity -such as savings and gifts- over time. Their capacity to decrease their mortgage debt and use other forms of financing also increases in the period from 2006- 2014. Second time buyers (‘doorstromers’) make use of the positive home equity of their previous house and also increase the use of other forms of equity over time. When we compare single and cohabiting households, we observe that single households seem to have lower mortgage debt on average and also more potential to reduce the mortgage debt at the time of purchase.

Our results have to be taken with a grain of salt: First, they can be driven by cheaper house prices and a tax reduction on gifts (‘schenkingsvrijstelling’). Unfortunately our data does not allow us to pinpoint the exact source. If gifts are the driving force in lowering the actual mortgage, we overestimate the potential of households to lower their mortgage. Secondly, our data show substantial heterogeneity: further studies should focus on subgroups to validate to what extent our figures are representative for them. 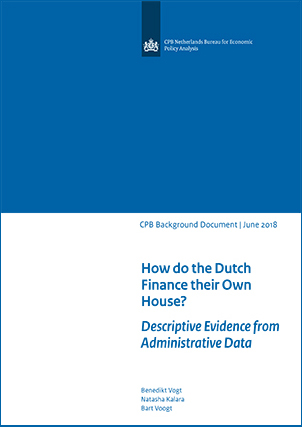 How do the Dutch Finance their Own House? – Descriptive Evidence from Administrative Data
Pdf, 1.3 MB
Download

Capital position of banks in the EMU: an analysis of Banking Union scenarios

This CPB Background Document provides details of the simulations of shocks to the capital position of banks in the EMU that underpins the Financial Risk Report 2018 of the CPB. This involves investigating the potential impact of two legacy problems on the capital position of banks. These problems are the high amount of government debt, especially in Italy, and the high level of non-performing loans on banks’ balance sheets.

We consider shocks in which either one or both write-offs are required. We also investigate regulatory changes on the capital position of banks that are proposed for the deepening of the Banking Union.

We investigate both the write-offs and the regulatory changes by looking at the loss of capital (or addition to risk weighted assets) both at a country-level and at the individual bank level. We also consider the simultaneous implementation of combinations of these write-offs and regulatory changes. The impact on the capital position of a bank is measured by the change in the bank’s core capital (CET1). This is the most narrow definition of capital used by the Bank for International Settlements under Basel III, and is commonly used to express the impact of stress tests.

For the analysis we use data on the 92 biggest banks in the Eurozone and other EU countries.  We obtain data on the balance sheet positions of these banks from the European Banking Authority’s (EBA) transparency exercise. The EBA data collection includes all large banks that are under direct supervision of the Single Supervisory Mechanism (SSM). Note that small banks are not included in this dataset. For the current analysis we use the data from June 2017. In the analyses we only consider the direct (or first-round) effects on the capital position of banks. Due to the nature of the data, we are not able to include potential second-round effects, induced by changes to the state of the economy or for example via inter-bank loans or shares.

The results we obtain can be summarized as follows. First, we simulate the effects of a write-off of 20% of Italian debt in case of a restructuring. Our findings show that predominately banks in Italy are hardest hit, while the impact on banks outside Italy is only minor. We also study a 20% write-off of the debt of all GIIPS  countries. In this example it is primarily banks in Portugal, Italy and Spain which see a substantial drop in their core capital ratio. These two findings show that the national sovereign-bank nexus may still pose a threat, but that the risk of direct contagion to banks in other countries is low.

Third, we study the effects of writing-off a fraction of the non-performing loans (NPL). Recently the European Central Bank (ECB) has set an addendum to the guideline for banks’ NPLs.  Key in this guideline is reducing the amount of NPLs from banks’ balance sheets, and setting more strict guidelines for handling future NPLs. In this section we simulate the outcome for the capital position of banks in response to writing-off a fraction of their exposure to NPLs, where we take the example of a 20 percent write-off. We find that banks are hit severely producing especially large losses in Southern-European countries.

Finally, in Section 3 we combine some of the write-offs and regulatory changes above in more comprehensive scenarios. Generally, the results show that it is primarily the same banks from southern European countries which suffer losses. 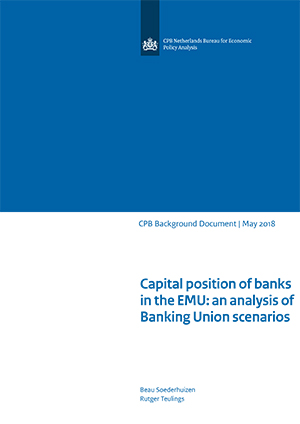 Capital position of banks in the EMU: an analysis of Banking Union scenarios
Pdf, 1.4 MB
Download

Safe assets, assets with low risk and high liquidity, are the cornerstone for modern financial systems. The biggest holders of safe assets are banks, which need to hold safe assets to meet capital and liquidity requirements. Safe assets also provide high-quality, liquid collateral for banks’ repo transactions. Besides, safe assets provide benchmarks for the price formation of other financial assets.

The supply of safe assets in the euro area is lower than that in the United States, which is considered to impair financial stability in the euro area. First, the scarcity of safe assets exacerbates capital flows to safe countries during a crisis. Second, European banks increased their holding of domestic government bonds during the crisis., that intensified the relationship between banks and governments. To resolve these vulnerabilities, economists have made different proposals to create a new safe finance instrument. The new safe assets should achieve two goals of increasing the supply of safe assets, and weakening the bank-sovereign nexus.

This background document provides a review on proposals for European Safe Bonds (ESBies). ESBies are the senior part of sovereign bond-backed securities (SBBS) in which government bond yields from all euro-countries are divided into a senior and a junior part. The design of ESBies does not assume risk sharing across countries. Our review suggests that ESBies might increase financial stability in the euro area, by increasing the supply of safe assets and weakening the sovereign-bank nexus.

The regulation on sovereign exposure needs to be adjusted to create a level playing field for ESBies. In May 2018, the European Commission proposed an enabling regulatory framework for the development of sovereign bond-backed securities, which would allow a neutral treatment of ESBies relative to sovereign government bonds. This would pave the way for the demand of ESBies by banks and insurance corporations. 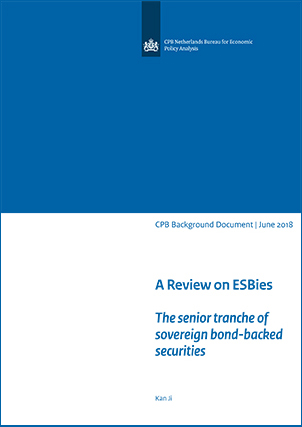