EU Services Directive has substantial effects on the economy

Press release
The introduction of the EU Services Directive can increase European gross domestic product (GDP) by 32 to 74 billion euros, I.E. by 0.3 to 0.7 per cent. The economic effects differ for the various Member States. For most of the new Member States the expected GDP increase exceeds the EU average.
Read the complete press release

The country-of-origin principle, introduced by the Services Directive, accounts for more than one-third of the effects.

These conclusions are drawn by researchers Roland de Bruijn, Henk Kox and Arjan Lejour in CPB Document 108, 'The trade-induced effects of the Services Directive and the Country of Origin Principle'. This report is a follow-up study to the earlier CPB publication 'The free movement of services within the EU' that analysed the effects of the Services Directive on trade and foreign direct investment.

Services Directive
National differences in regulation severely hamper services trade in Europe. Service providers must comply both with regulations in their home country and in the countries to which they export. Examples are regulations on educational qualifications, required licenses, obligatory membership of professional organisations, nationality requirements for management, and liability insurance.

In 2004 the European Commission proposed the Services Directive in order to remove regulatory barriers to services trade within the EU.

Macroeconomic effects
Earlier research by CPB already estimated that the full implementation of the Services Directive could increase European trade in commercial services by 30 to 60 per cent. This represents a growth of total intra-European trade by 2 to 5 per cent, because services trade is still tiny compared to trade in goods.

This new research shows that, by consequence, European GDP can increase by 0.5 to 0.7 per cent extra. Expressed in terms of the GDP value of 2004, this represents an impulse for the European economy of 32 to 74 billion euros. The effects for European consumption are even larger: consumption may increase by 0.5 to 1.2 per cent when the directive is fully implemented.

Effects for various Member States
The trade effects and the macroeconomic effects of the Service Directive differ by Member State. This depends on the present magnitude of their non-tariff barriers, their most important trading partners and comparative advantages. Countries like the Netherlands, Austria, and Germany increase their specialisation in commercial services. Because of more open borders they get more opportunities for trade and will benefit from the directive. The new EU member states will experience a relatively strong increase in their services imports. Their specialisation shifts more towards manufacturing, which has even a larger positive effect on their economy than the old Member states will experience.

This report concludes that the country-of-origin principle accounts for more than one-third of the trade increase, and for about 40 per cent of the expected growth in GDP and consumption. 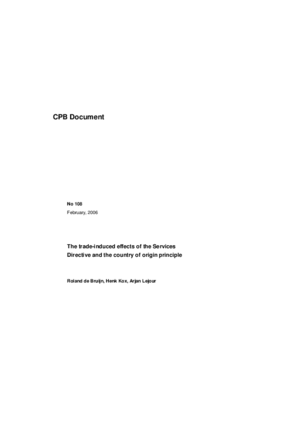 The trade-induced effects of the Services Directive and the country of origin principle
English, Pdf, 313 KB
Download