Why do macro wage elasticities diverge?

The data have been analyzed in a meta analysis that relates differences in each elasticity of pay to variations in study characteristics, economic or institutional variables and the econometric specification of underlying wage equations.

The results indicate that notably the econometric specification of the reported wage equation matters. The dynamic specification, the choice of explanatory variables and restrictions on estimated coefficients all have their impact on estimated elasticities. The reported value of the output price elasticity of pay is sensitive to restrictions on the consumer price and vice versa. In case of tax elasticities the dynamic specification matters, and the value of the replacement ratio elasticity of pay based on sectoral data is higher than the one obtained from macro data.

The results for the unemployment elasticity of pay are close to those found in the wage curve literature. Finally, we generate benchmark values for each type of elasticity. 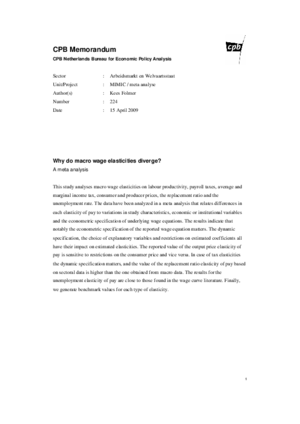