Olivier Blanchard’s and Daniel Leigh’s work on growth forecast errors and fiscal multipliers in 2009-2011 has been highly influential. In this background document we extend their approach to recent years. 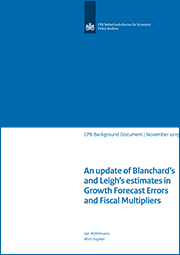 We did not find convincing evidence for stronger than expected fiscal multipliers for EU-countries during the sovereign debt crisis (2012-2013) and during the tepid recovery thereafter.

Blanchard’s and Leigh’s work on growth forecast errors and fiscal multipliers has been widely discussed, has clearly influenced the policy debate and possibly the policy stance in some countries. In this background document, we extend their estimates up to 2015 and update their estimates on the basis of more recent actual data on economic growth. Our results for 2009-2010 and 2010-2011 are in line with those of Blanchard and Leigh and can be seen as an indication of larger than expected multipliers during the credit crisis. For the two added periods, 2013-2014 and 2014-2015, we do not find any indication of larger multipliers. We do find a statistically significant coefficient for the whole sample period 2009-2015, but this result disappears when we only look at the period after the financial crisis (2011-2015).

The policy relevance of this result is that on the basis of the Blanchard-Leigh approach there is no evidence that during all recent crises fiscal multipliers were higher than expected. There are indications this is true for the credit crisis (2009) but the evidence is less convincing for the sovereign debt crisis (2012-2013). While the drop in output in the euro area was smaller during the sovereign debt crisis, the output gap was almost as severe as in 2009. These results indicate that, using the Blanchard-Leigh approach, there is no evidence that multipliers are currently higher than before the crisis. 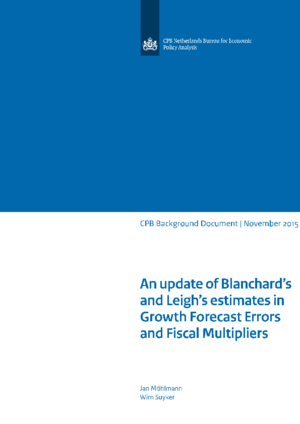