The question is no longer if, but when and how unconventional monetary policy will be phased out. The undoing of the unconventional policies will affect European economies, just as their build up stimulated the euro area economy. 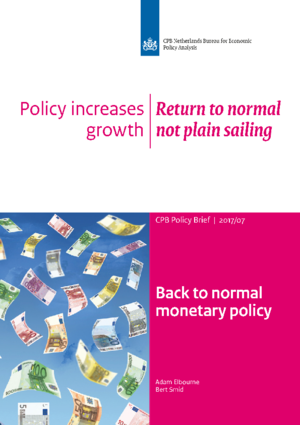 Empirical evidence shows that the unconventional monetary policy of the ECB in recent years has led to lower interest rates on long-term government bonds and higher equity prices in the euro area. There is also some evidence for positive effects on GDP and, to a lesser extent, on inflation. Unwinding these policies will probably lead to higher interest rates and lower growth and inflation. These effects will be greatest in countries with healthy banks, the countries that have also benefited most from the build-up.

The Netherlands has a good starting position for the removal of unconventional ECB policies. Dutch government finances are good and the banking system is healthy again. For pension funds and insurers, a higher interest rate will be beneficial anyway. For households and companies with high debts however, higher interest rates may be detrimental.

Strengthening the economy and improving public finances will help governments to cope with the phasing-out of unconventional monetary policy and be well prepared for potential new economic shocks. This applies especially to those countries that are relatively less well-prepared today. For these countries, there is a trade-off between prudent fiscal policy creating space to offset future economic set-backs and the effects on short-term economic growth. By strengthening the financial sector, these countries can still benefit from the loose monetary policy in the short term and, in the long run, will be better able to absorb economic shocks.

Even so, more risk sharing in EMU may be necessary to survive as a currency union. The euro crisis might start up again or the sustainability of government debt may again be doubted. Having said that, the chance of a new euro crisis has been diminished by improvements to the institutional design of Economic and Monetary Union that pressure from the financial crisis forced. For example, important steps have been taken in the formation of a banking union. However, more risk sharing could be achieved and one option would be through a higher EU budget, with more being paid for at the European level. Unfortunately, more risk sharing is not without problems: it can make it attractive for countries to take greater risks and it requires social and political support that may not exist.

February 2019: Subsequent research (CPB Discussion Paper 391) shows that a number of studies cited in this policy brief employ a technique that does not provide reliable estimates of the effects of unconventional monetary policy.