Credit Supply Shocks in the Netherlands

This study looks at the effects of credit supply shocks in the Netherlands and provides estimates of how important credit supply disturbances have been for explaining the recent disappointing economic growth. 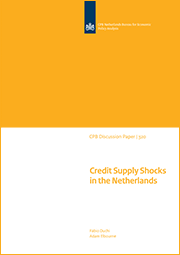 We find that domestic credit supply shocks can account for about half of the below trend growth in 2009 but that they have played very little role from the end of 2012 until the end of our sample period in 2014.

The banking crisis in 2008 has been followed by a sustained period of low growth. Whilst this is a common finding after a banking crisis, many other things have happened beside problems with the banks. For example, the collapse of world trade, the euro crisis and government austerity. How much of our recent disappointing economic performance is due to contractions in credit supply and how much to these other factors? To answer this we use a vector auto regression (VAR) identified with sign and zero restrictions on data from 1998 to 2014. We start by looking at what a contraction in credit supply does to the macro economy before estimating when credit supply shocks hit the Netherlands and how big they were. The set of restrictions we use relies on supply and demand shocks pushing prices and quantities in different directions. An adverse credit supply shock raises the price of credit but contracts the quantity of loans. In contrast, an adverse loan demand shock decreases both the price and the quantity. With enough of these restrictions we can use the model to back out a time series of the size and timing of the shocks that hit the economy. We find that a typical credit supply shock depresses inflation, GDP growth and lending growth. Interestingly, we find evidence across all of the specifications we estimate that lending growth recovers more quickly than GDP growth, which suggests that firms and households can, with time, switch some of their external finance needs to other sources of credit.

We also look at investments and consumption separately, since there have been many reports of households and small firms being unable to obtain credit. We find that investments are hit considerably harder than consumption but that they recover much more quickly. 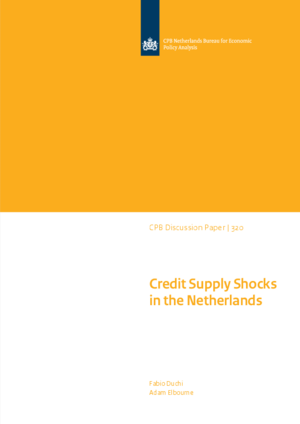