The free movement of services within the EU

Press release
Differences in national regulation between EU Member States strongly restrict trade in services. The proposal of the European Commission to stimulate the internal market in services, the so called Services Directive, could boost trade in commercial services by 30 per cent to 60 per cent.
Read the complete press release

Since this subject is of topical interest, CPB has revised its previous reports CPB Document 69 and the CPB Communication of 23-9-2004.

Researchers Henk Kox and Arjan Lejour of CPB Netherlands Bureau of Economic Policy Analysis (CPB) draw these conclusions in CPB Discussion Paper 49, 'Regulatory heterogeneity as obstacle for international services trade' which is published today. This report is a scientific deepening of previous research on the Services Directive which has been published in CPB Document 69, 'The free movement of services within the EU'.

Within international trade, services trade is often considered as the poor cousin. Services contribute only 20 per cent to total exports, while the share of services in GDP is about 70 per cent. Services are often thought to be non-tradable. The degree of regulation contributes to the limited tradability. Services markets are more regulated than goods markets. The difficulties in assessing the quality of services before the purchase constitute an important reason for this difference. Governments have implemented regulations to guarantee the quality of the provision of services, for example by requiring minimal professional qualifications.

The researchers conclude now that the implementation of the directive implies larger trade effects than presented in previous reports. The method to handle the trade and regulations data, which has been used in the earlier analyses, proved to be not entirely correct. These shortcomings have been repaired in the new analysis. As a result, the trade effects are larger. The corrections have no consequences for the estimated effect on foreign direct investment in services, as presented in the previous studies.

We investigate how the proposed EU directive could lower the intra-EU heterogeneity in product market regulation for services, and what effect this would have on bilateral trade and investment in the Internal Market for services. We find that commercial services trade in the EU might increase by 15-30%, while the foreign direct investment stock in services might rise by 20-35%. 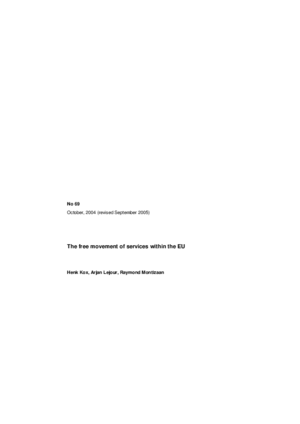 The free movement of services within the EU
English, Pdf, 489.2 KB
Download