Press release
The Dutch economy is flourishing. The Netherlands is a frontrunner in Europe, with growth figures of 3.3% (this year) and 2.5% (2018). Government finances are healthy. For both years, there is a budget surplus, and the government debt is below the maximum budget deficit set by the EU. In addition, the labour market is improving, which means it is tightening. For example, it is becoming more difficult for companies to find suitable personnel. These are the conclusions by CPB Netherlands Bureau for Economic Policy Analysis in its Macro Economic Outlook (MEV). The latest economic projections hardly deviate from those published in August, in the interim projections (cMEV). 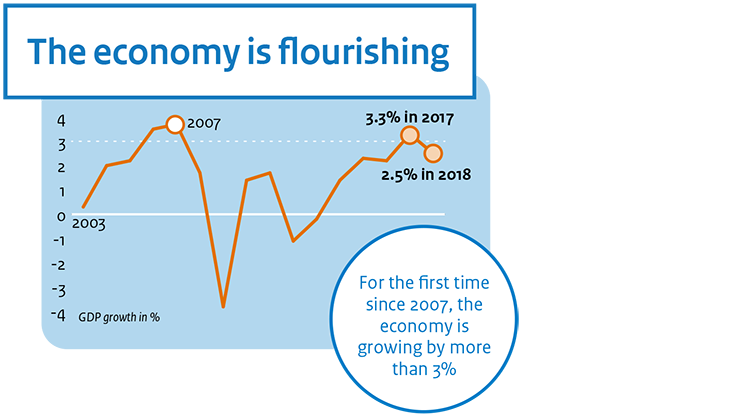 The Dutch economy is growing across the board. Increases in the export of goods are above average, consumption is benefiting from the increase in employment, and companies are increasing their investments, in order to meet the large demand. The very active housing market has elevated the level of housing investment, although this will slow down in the coming years – due to the far-advanced catch-up process on the housing market and labour shortages in certain parts of the construction sector.

Developments on the labour market are plainly positive. Employment is rising, as are the numbers of labour hours per employed person. There are also more job vacancies. For the time being, these favourable circumstances are expected to continue, causing the tightness of the labour market to increase. This will improve the position of the employed compared to that of the employers, which is likely to lead to improvements in labour conditions by way of higher wages, more permanent employment contracts besides flexible contracts, and higher tariffs for independent professionals.

As a result of the continuing economic growth and related increases in tax revenues and decreases in unemployment benefit expenditures, the budget surplus is projected to increase in both 2017 and 2018.
Projected surpluses are larger than those over the 2006–2008 period, as well as those elsewhere in the eurozone. For the coming year, all population groups included in CPB’s projections, on average, are projected to see an increase in purchasing power. Median purchasing power, in 2018, is projected to increase the most for the employed (+0.8%), while pensioners will experience an 0.6% increase in income, and benefit recipients will also have 0.3% more to spend, next year.

On a global level, the economy is projected to grow by 3.4% in 2017, and by 3.6% in 2018. For the eurozone, this will be 2.0% in 2017 and 1.8% in 2018. The increasing economic growth involves an increase in world trade. These favourable circumstances are surrounded by uncertainties, both globally and within Europe. This relates, among other things, to the European Central Bank’s monetary policy, insolvent banks in Italy, Brexit, US financial policy, and geo-political tensions around North Korea. In addition to these downward risks, the current economic upturn in Europe and the United States may also be underestimated.

In its MEV report, CPB also concludes that the general perception of the Dutch education system being excellent for pupils who are lagging behind should be revised. The Netherlands currently ranks somewhere in the European middle, where this concerns pupils who have not completed an intermediate vocational education (mbo-2), higher general secondary (havo) or pre-university (vwo) education. This seems to call for additional policy that is focused on unlocking the potential in less-talented people.

In this publication CPB presents its analyses and projections of both the Dutch and worldwide economy in 2017 and 2018. The Outlook is only published in Dutch, the download is a translation of chapter 1 of the Dutch publication. 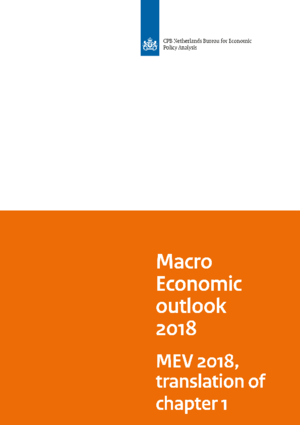 This publication is in Dutch, there is no English translation! 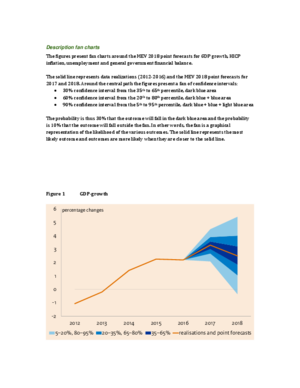 This publication is in Dutch, there is no English translation!
September 19, 2017

Maurits van Kempen
This publication is in Dutch, there is no English translation!
September 19, 2017

The Dutch economy is flourishing. The Netherlands is a frontrunner in Europe, with growth figures of 3.3% (this year) and 2.5% (2018). Government finances are healthy. For both years, there is a budget surplus, and the government debt is below the maximum budget deficit set by the EU. In addition, the labour market is improving, which means it is tightening. For example, it is becoming more difficult for companies to find suitable personnel. This is the third forecast of 2017, CPB's Macro Economic Outlook (MEV) 2018. CPB presents its analyses and forecasts of both the Dutch and worldwide economy in the years 2017 and 2018. 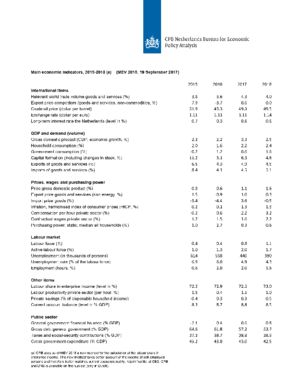 (a) CPB uses as of MEV 2018 a new method for the calculation of the labour share in enterprise income. This new method takes better account of the income of self-employed persons and therefore better matches current economic reality. A joint 'notitie' of CBS, CPB and DNB is available on this subject (only in Dutch).