Market size, institutions, and the value of rights provided by patents

Despite the centrality of incentives for innovation in models of economic growth, there is little systematic evidence that the value of technologies varies with market size and institutional arrangements. This paper presents micro-evidence indicating the value of patent rights for a given technology show substantial variation across countries. 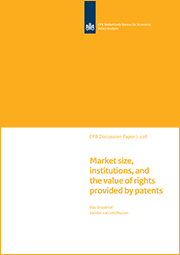 Read also the CPB Policy Brief 2012/05 'The value of a well-designed EU Patent'.

A large part of this variation can be attributed to market size and institutional arrangements. We estimate the value of patent rights by exploiting the validation behavior of holders of European Patents granted in 2004. We control for unobserved patent and country characteristics. The mean value of patent rights across countries ranges from 17 thousand euro in Germany to 400 euro in Ireland. The mean value over 16 countries is 9 thousand euro per country. Protection of intellectual property rights and market size seem to explain most of the German advantage. The estimated total value of granted European Patents is 2.6 billion euro in 2004, of which a third are German patent rights.

Competition and regulationEducation and Science