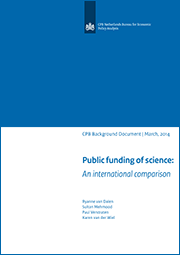 These seven countries have a relatively high research productivity: the Netherlands, Belgium (focusing on Flanders), Germany, Switzerland, Denmark, the United Kingdom (UK) and the United States (US). For these countries, we outline the main features of public research funding as observed in 2011. We also explore whether there is a relationship between the way in which governments fund science and research performance.

We distinguish three ways for the government to fund science: (1) ex-post funding, in which money is paid in retrospect on the basis of measurable research performance; (2) ex-ante funding, in which money is provided in advance to pre-screened research projects; and (3) fixed funding, in which funding is allocated independent of research performance. In this document, we divide the total public research funding for each country into these three funding mechanisms. The analysis shows that all types of funding exist in six out of seven countries. However, the importance of each funding schema is quite different. The US allocate all public research money on an ex-ante basis. Belgium and the UK also score high on the extent to which ex-ante funding is an important allocation mechanism. Germany, Switzerland and Denmark use fixed funding to divide the majority of their public research funds. The Netherlands is the only country that has no dominant funding mechanism.

Countries that allocate more resources through ex-post funding spend, on average, less public research money per citation and publication. This suggests that a greater degree of ex- post funding may lead to a more efficient scientific production. A possible disadvantage of this type of funding is that strong incentives to provide measurable research output can be detrimental to immeasurable output. We find no relationship between the level of ex-ante funding and the scientific production or efficiency within our sample of countries. A higher degree of fixed funding seems to be associated with more research output in terms of the number of publications and citations. The lack of financial incentives does not appear to lead to lower research output. This can possibly be explained by the intrinsic motivation of research institutes and/or reputation concerns. Please note that the analyses in this background document provide insights into the relationship between the type of public funding and research performance, but cannot be interpreted as causal evidence for the effects of such funding mechanisms.