Press release
At the request of the Lower House of the Dutch Parliament, CPB Netherlands Bureau for Economic Policy Analysis (CPB) conducted a second-opinion survey on the report ‘The Netherlands & The Euro’ by Lombard Street Research. CPB concludes that the report, which was presented last month, is deficient in several respects. 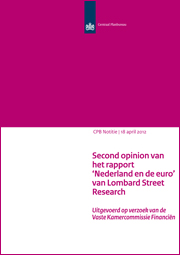 The two documents published by Lombard Street Research (a ‘special report’ or summary, and a ‘full report’) fail to provide enough evidence to confirm its main findings: namely, that the introduction of the Euro has been extremely costly for The Netherlands and that the Dutch could save money by a Euro-exit.

CPB reviewed the research methods used by Lombard Street Research and found they have a number deficiencies. The report, for example, attributes all differences in economic development between EMU-members and non-EMU EU-countries to the Euro, while ignoring entirely other possible causes for those differences in economic developments. Lombard Street Research under-estimates the costs of leaving the Euro, while over-estimating the costs of Dutch financial support to the other Euro countries. Moreover, the summary refers explicitly to information that cannot be found in the full report.

Finally, the report adheres for the most part to short-term comparisons between countries, while overlooking almost entirely the longer term, changes in economic structure, the behavior of institutions (for example banking supervision) or the influence of expectations on financial markets. In drafting these reports Lombard Street Research made no use of econometric or statistical methods to explain the effects of either the introduction of the Euro, or a Euro-exit as envisioned in the reports. The reports also fail to provide references to either academic literature or data sources. CPB’s second opinion provides an evaluation of the Lombard Street Research reports. In carrying out this evaluation CPB neither conducted new or additional research, nor made any alternative cost-benefit analysis of the Euro, as this would be too complex and time consuming. Last autumn CPB published the book, 'Europe in Crisis', which is an analysis of the current Euro debt crisis. Although the book is only available in Dutch, some of its main findings have been translated into English.

On 21 March the CPB received 49 additional questions from the VKF. The CPB tested the request against the Instructions for the Planning Offices, which were recently adopted by the Prime Minister (Staatscourant, 21 February 2012).1 The CPB is happy to comply with the request to the extent the questions can be answered on the basis of the expertise and capacity available at the CPB. 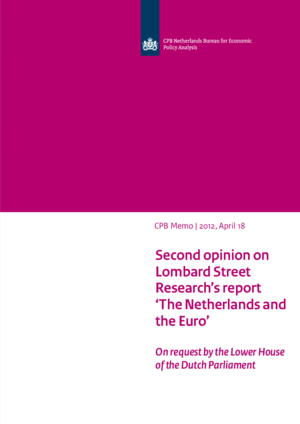