Shop till you drop those tax rates: Treaty shopping as a determinant for FDI stocks

Press release
Multinational enterprises are able to reduce their international corporate tax burden with 6 percent by routing their investments through third countries, the so-called "treaty shopping". Thus treaty benefits can be reaped which are unavailable through direct tax routes. 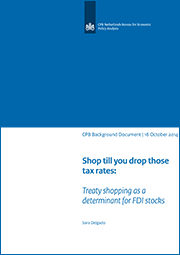 The issue is investigated by performing cross-sectional regressions, whereby standard models for inward and outward FDI are augmented with a betweenness centrality indicator, which reflects how attractive a country is as conduit for dividend flows. The document is structured as follows. Chapter 2 discusses and motivates the research methodology, while chapter 3 describes the data used in the analysis. In chapter 4, the baseline regression results are presented followed by a number of robustness checks. Finally, in chapter 5 we come to conclusions.

Shop till you drop those tax rates: Treaty shopping as a determinant for FDI stocks
English, Pdf, 2.1 MB
Download