The effects of CBS revisions on CPB forecasts

When CPB makes its official forecast it is based on preliminary estimates of economic growth by Statistics Netherlands. Being uncertain about the current state of the economy is one reason why we are uncertain about future economic developments.

This document puts this uncertainty into perspective by asking how different our forecast would have been based on revised data.
We begin by summarizing the revisions to GDP and its components over the period 2004-2014. Over this period GDP growth (quarter on quarter) was typically revised upwards on average 0.1 percentage points with a standard deviation of 0.2 percentage points from the 1st to the second estimate of the quarterly growth rates.

The second part of this document looks how a typical revision would change our published forecasts. Our measure of a typical revision takes into account the observed cross correlation between the components of GDP, for example when GDP is revised upwards consumption is also revised upwards. A typical GDP revision in the last quarter of this year would increase our GDP forecast for next by 0.23 percentage points.

Finally, we use our measure of the sensitivity of our published forecasts to typical revisions to get an idea of the importance of uncertain national accounts data for our overall forecast error. For the period 2004-2014 the root mean square forecast error for our CEP forecast would decline from 0.65 percentage points  to about 0.51 percentage points if our forecasts were based on definitive rather than provisional estimates of the national accounts. Thus, the majority of our forecast error can be attributed to other sources of uncertainty. 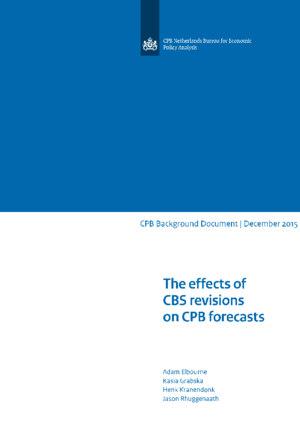