Press release
During the third quarter of 2012, the Dutch economy shrunk by 1% (the strongest decline since 2009) and also for the fourth quarter no growth is projected. This trend is expected to continue for the first half of 2013 due to the low level of consumer confidence, spending cuts and stringent credit conditions.
Read the complete press release

Since the first quarter of 2011, the Dutch economy has shrunk during four of the six quarters and hardly grew in the remaining two. In actual fact, it has been shrinking for the past 18 months and is not projected to recover even slightly before the second half of 2013. This according to the December projections for the Dutch economy for the years 2012 and 2013, published today by the CPB Netherlands Bureau for Economic Policy Analysis (CPB Policy Brief 2012/07, (only in Dutch)).

The Dutch economy has been estimated to have shrunk by 1% in 2012, and for 2013 a decline of ½% is projected. This will cause unemployment to rise to 6% in 2013. General government finances are also affected by the shrinking economy. This year’s EMU deficit is expected to come to 3.8% of GDP, and for 2013 to 3.3%. Thus, despite the considerably weakened economy, the EMU balance will improve, as a result of sizeable spending cuts and increases in financial burden.

The downward adjustment to the projected EMU balance for 2013 from the projections in CPB’s Macro Economic Outlook (MEV) 2013, published last September, is fully due to the lower growth projection and accompanying lower tax revenues.

The eurozone is in recession, with an expected economic downturn of ½% for 2012 and ¼% for 2013. Despite several measures to increase the structural strength, the performance of the Dutch economy is disappointing when set against that of other countries in the eurozone. On the positive side, European financial markets seem to have entered calmer waters. 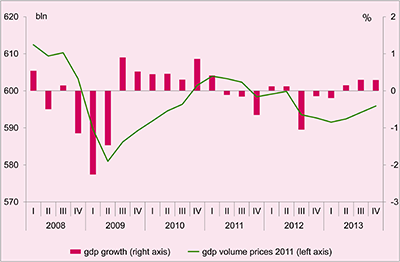