Press release
Today, CPB Netherlands Bureau for Economic Policy Analysis presents the Dutch Cabinet with its updated macroeconomic projections for 2013 and 2014, for the finalisation of the decision-making process around the 2014 national budget.
Read the complete press release

According to these intermediate projections, the development of the Dutch economy is less favourable than in last June’s projections. With a 1¼% decrease, GDP volume will shrink in 2013 by a quarter per cent more than projected earlier. Economic growth (GDP growth) for 2014 has been adjusted downward by ¼% to ¾%. Unemployment for 2014, is projected to increase by 35,000, which is mainly due to Statistics Netherlands'  downward adjustment of GDP growth in the first quarter of 2013 and the projected, slower growth in world trade for 2013 and 2014. A weaker development in real wages will contribute to less growth in private consumption in 2014. These CPB projections include the National Accounts 2012 and the preliminary GDP data by CBS on the second quarter of 2013.

CPB, at this time, does not provide any further elaboration of these intermediate projections. On Prinsjesdag – the opening day of Parliament; this year on 17 September – CPB will publish its Macro Economic Outlook (MEV) 2014, with an elaboration and explanation of these projections as well as a detailed analysis of the Dutch economic situation. 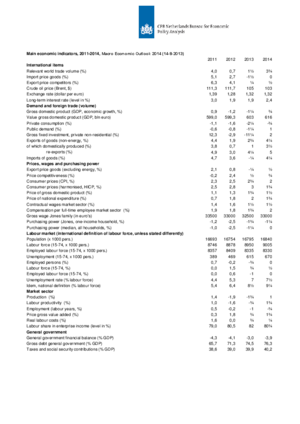