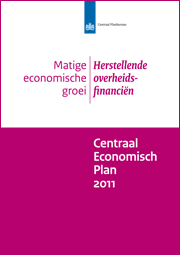 According to the Central Economic Plan 2011, published by CPB Netherlands Bureau for Economic Policy Analysis today, the Dutch economy is projected to grow by 1¾% and 1½% in 2011 and 2012, respectively. These modest growth figures are not sufficient to catch up on the loss in growth sustained during the past recession. The economic growth is largely due to exports. Household consumption and business investments are also contributing factors. The labour market continues to exhibit positive trends: unemployment is projected to further decline to an average of 4% in 2012. Due to the higher inflation of 2% in 2011 and 2012, and due to policy measures, average purchasing power will decline in both forecast years. The forecasted budget deficit is declining rapidly from 5.2% of the gross domestic product (GDP) in 2010 to 2.2% of the GDP next year.

Major uncertainties
The final estimate of this Central Economic Plan was completed at the beginning of March. This means that the most recent developments in, for example, Japan, have not been included in the figures. Even if this had been possible, it would probably have been difficult at this time to estimate the effects on the development of the Dutch economy. Tentative estimates were produced on the basis of alternative scenarios, however, to account for the effects of higher oil prices, a worldwide recovery of consumer and producer confidence and a more expensive euro.

Sharp worldwide difference in growth
The world economy is recovering from the crisis. However, economic performance varies sharply from one country to another. The GDP of emerging economies in Asia last year increased by 9.0%. Growth figures in the United States (2.8%) and the euro region (1.7%) lagged far behind. The emerging economies are projected to continue to do relatively well in the forecast years as well. The national debt as a percentage of GDP increased sharply in highly developed economies and governments are faced with the task of getting their government finances in order. This will reduce economic growth in the coming years. The growth of the relevant world trade, in which the highly developed economies carry a lot of weight, is consequently slowing down from over 11% in 2010 to 6¼% this year and 5% next year.

According to the provisional figures published by Statistics Netherlands, the economy grew by a 0.6% (quarter-on-quarter) in the fourth quarter of 2010. The growth rate is projected to decline somewhat in the next few quarters, resulting in an annual GDP growth of 1¾% this year and 1½% in 2012. The sharp decline in production during the Great Recession and the modest forecasted and actual growth since that time imply that the production peak experienced at the beginning of 2008 will only be equaled by the middle of next year. Roughly speaking, the Netherlands has therefore lost four years in economic growth due to the credit crisis.

Export supports GDP growth
Exports follow the global trade pattern: following strong growth in 2010, the pace is slowing in the forecast years. Nonetheless, exports in 2011 and 2012 will continue to account for the major share in economic growth.
The anticipated increase in household consumption will remain modest, especially because employment is only increasing to a limited extent and purchasing power is falling. Business investments, after two years of contraction, are projected to once again exhibit growth. Particularly investments in machinery, computers and means of transport are recovering. Due to the fact that existing production capacity is still not yet being fully exploited, replacement investments are probably playing a major role.
Government spending is resulting in the lowest accumulated contribution to growth over the three-year period 2010 -2012, since this figure was first measured in 1970. A steady growth in healthcare expenditures is offset by a decline in the public sector's consumption of and investment in goods and services, and a contraction in public sector employment.

Government finances are improving at a rapid pace
The budget deficit is expected to decrease from 5.2% of the GDP in 2010 to 2.2% of the GDP in 2012. This brings it down to below the 3% Maastricht ceiling already one year earlier than anticipated. The reduction in the budget deficit in 2011 and 2012 is related to the continued economic recovery and the restrictive fiscal policy, that is, the expiration of the stimulus package and the deficit reducing measures of the previous, as well as the current cabinet. The deficits are causing EMU debt to continue to rise up to 65.9% of the GDP in 2012. 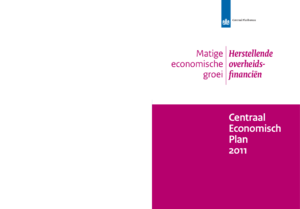 The Netherlands and the European debt crisis

Over the past 18 months, the interest rates for the government debt of Greece, Ireland, Portugal and Spain have risen to such levels that redeeming these debts has become problematic. This directly affects the Netherlands because it provided support to both Greece and Ireland via various channels.

Will the troubled countries be able to fully repay their debt? Policy institutions remain confident, but the premiums to insure the government debts of these countries show that the financial markets do not share this assessment. Certainly with respect to Greece, there is a risk that the country will not be able to fully repay its debt. If Greece’s level of debt is indeed too high to redeem, continuing to require full redemption will be detrimental to the Netherlands, as this would negatively affect its growth perspectives. This will decrease the amount of debt repaid. Reducing the debt will prevent this and will therefore benefit all parties.

Who will pay the bill of such a debt decrease: the original creditors or the governments of the Euro area (and thus ultimately their tax payers)? As soon as it is clear that a troubled country is unable to fulfil its obligations, a decision on this issue is required. The longer this decision is postponed, the higher the proportion of the original debt re-financed by the emergency fund will become. Consequently, the proportion paid by the creditors will be lower, and the portion of the bill eventually presented to the governments of the other Euro area countries will increase. It will prove difficult to charge the creditors, however, as these largely consist of banks, insurers and pension funds. It is unclear whether all European banks will be able to bear such a loss. Also, there is a fear that restructuring will lead to a European banking crisis. For this reason, the European banking sector must become healthy again and a mechanism enabling the restructuring of government debts must be established.

This CPB Policy brief is also published as a Dutch-version.

Four times a year CPB publishes short-term forecasts of the Dutch economy and the world economy. This is the first forecast of 2011, CPB's Central Economic Plan 2011. With this publication, CPB Netherlands Bureau for Economic Policy Analysis presents its analyses and forecasts of both the Dutch and worldwide economy in the years 2011 and 2012. 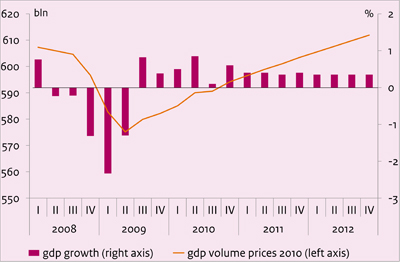